A strange title perhaps but its actually a very appropriate title :)!

I did a 16 mile walk last week and timed it so that I would reach Corfe Castle in time for the post sunset glow, intending to get some shots of the castle silhouetted against the sky. Now when you are walking that distance, it is not always easy to time your arrival to the minute and I know that as a photographer I should have made sure that I allowed enough time to get there early so that I could get my viewpoint etc right.  This is just good photographic practice, especially as sunsets are so fleeting!  In reality, I did get there in time, the sun had dropped below the horizon and I was ready for the explosion of light……..except it didn’t materialise as the sun dropped into a bank of very low cloud. I ended up with just a picture of the castle against a bland sky.

I began to wish I had walked slightly quicker, although in truth the day’s walk was more important to me than the picture anyway, because 15 minutes earlier as I was walking along Nine Barrow Down towards Corfe, there had been a lovely setting sun that would have silhouetted the castle very nicely.  However, that wasn’t really what I had in mind as I wanted that lovely post sunset glow that we often, well sometimes, get.  But the setting sun had been lovely! 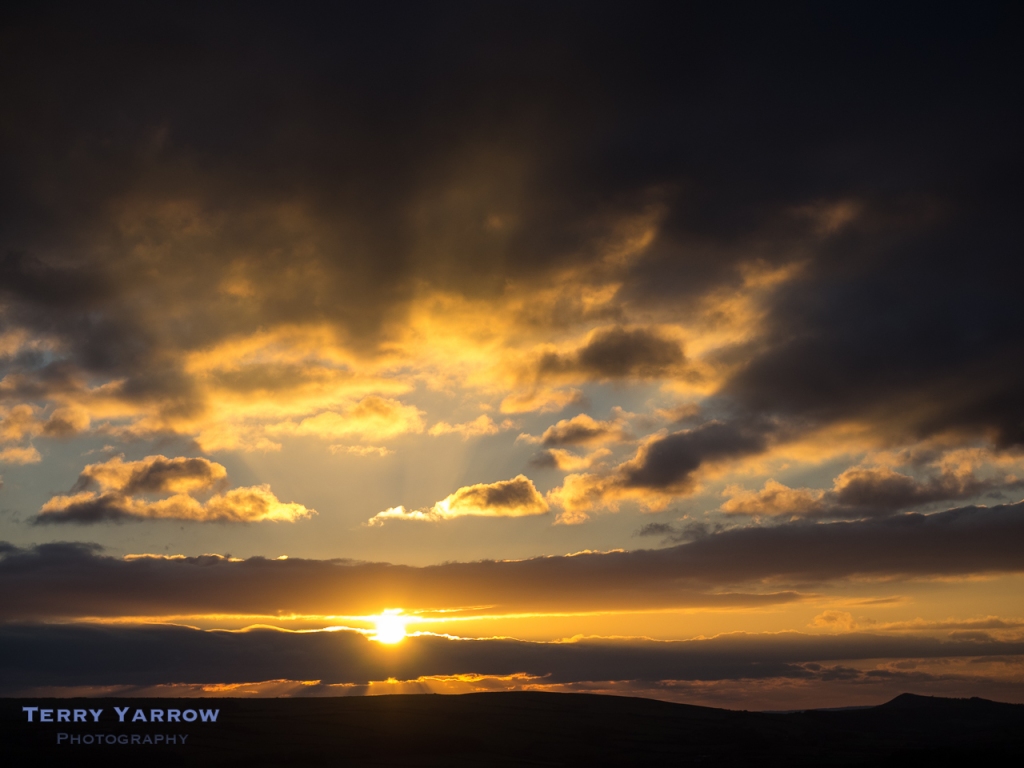 When I got home, I remembered that I had taken some shots of the setting sun as I walked along the ridge, albeit there was nothing of interest to put in the foreground at the time so I decided to put the two images together. I have never done this before and I am not really comfortable with it because it kind of feels like a ‘cheat’, although in reality I think what I’m not comfortable with is the passing off of a heavily manipulated image as real rather than the actual manipulation itself. This of course is something that came to the fore in the LPOTY competition a couple of years ago.

Most photographers will use Photoshop or Lightroom or whatever to process, improve and enhance their pictures and that in itself is nothing new – even in my younger days of ‘steam driven’ cameras we could be quite creative in the darkroom! But how much is too much?

In this case, both images (the sky and the castle) were taken by me on the same day just 15 minutes apart, and in fact, had I walked a bit quicker during the day and arrived at the castle before the sun had dropped below the horizon, the image at the top of this post is exactly the image I would have finished up with…….even if it wasn’t the image I originally had in mind.

A purist would undoubtedly say that any image manipulation is wrong.  However, others would argue that photography is an art form and much as a painter uses brushes, knives, sponges, rags or whatever to create his picture, so the photographer is perfectly at liberty to use all the tools that he has at his disposal.  After all it is very common, even essential, for landscape photographers to use filters on their cameras to balance the various light sources and tones etc, and this in itself is a form of ‘manipulation’.

So how much is too much?  Well in all honesty, I do think care is needed – I have seen photographs with spectacular sunset skies but where the angle of the shadows clearly indicate that the main picture was taken in the middle of the day.  In my view, creativity is to be applauded but it needs to be carefully applied, having in mind the overall picture.  But at the end of the day, it comes down to honesty and integrity – manipulate an image as much as you like, but be honest about what you have done rather than try to pass the image off as a real and original photograph.

So my confession is that the image at the top is not real……..but it might have been :)!

Comments and feedback on this blog are welcome.