Today, we woke up to snow :)!  Now that is a rarity in Southern England, especially the part where I live – frankly, we always miss out!  And I love snow!  So this morning when I realised there was a white covering (and that’s all it was) I quickly threw on my hat and gloves and set out for the local heathland.

The pavements looked slippery so in order to make quicker progress I walked in the road and I soon reached the start of the woodlands that lead up to the open heath. 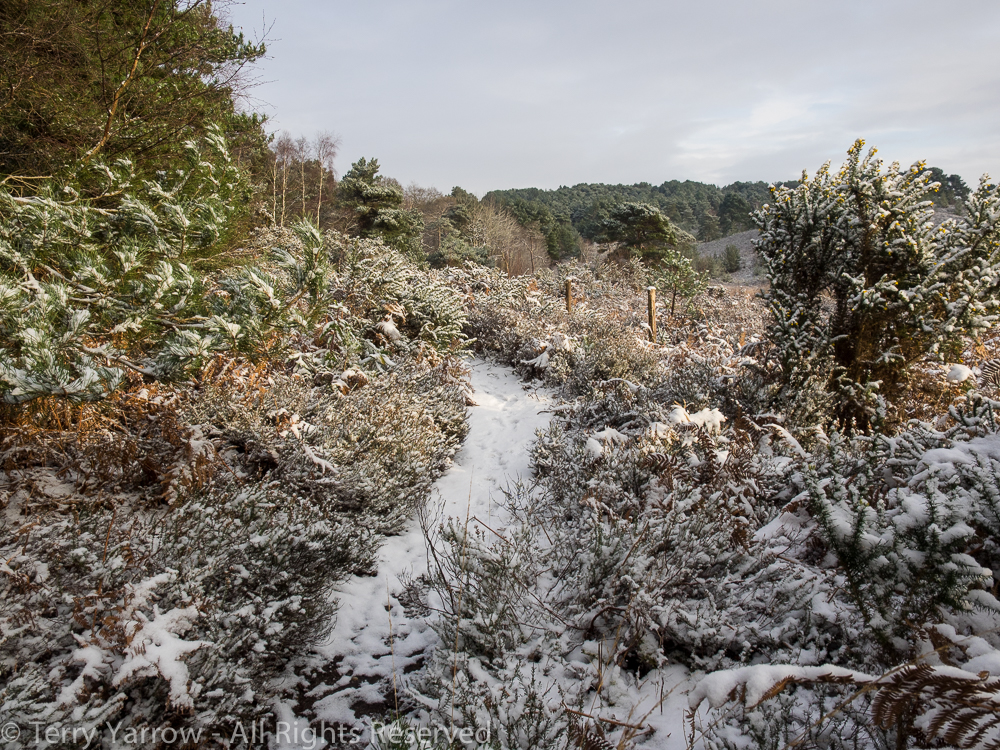 The path through the woods is a delight to walk.  It winds in and out, up and down, a gently undulating and meandering route with glimpses of the heath beyond.  The sun soon joined me on the pathway, and together we enjoyed an easy and picturesque stroll, stopping regularly to take in the views.  Often it seemed, a robin also joined me, although I am sure it wasn’t the same robin………they all look alike, but aren’t they great companions. 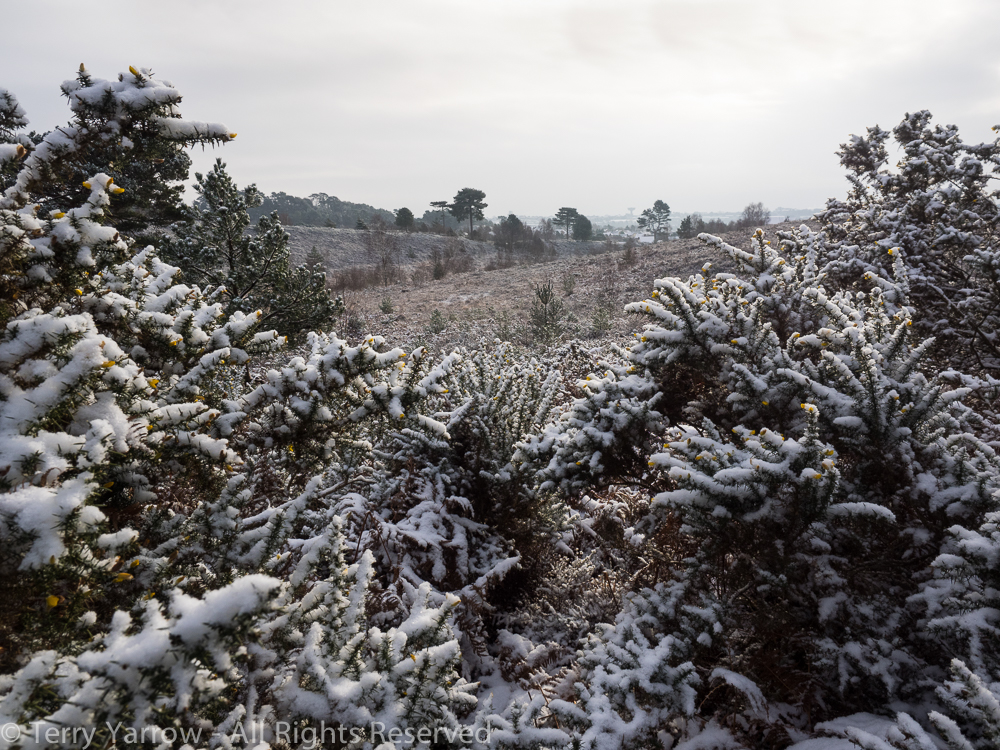 Everything was covered in a layer of white fur, and each fence post wore a white cap, as if trying to keep out the early morning chill that hung in the air.  And there was a chill!  But at least it was a still day with no wind to help that chill to penetrate through the layers of winter clothing.

The paths were white but footprints revealed that others had passed that way before me, probably dog walkers out for their early sojourn before heading off to work.  Retirement undoubtedly has its advantages and I am forever grateful that I am blessed with good health and am able to get out and enjoy the countryside!  So many don’t have that privilege and I feel for them.

We are so fortunate in these modern times that these small oases of countryside in the urbanity that makes up most of the area are tended by the local wildlife organisations and volunteers.  They work tirelessly to preserve what remains for all to enjoy.  Evidence of their presence is seen regularly in the piles of logs and other paraphernalia.

Preserving heathland is a constant battle to keep invasive trees and shrubs at bay.  Just the other day I chatted to the local warden who was clearing broken glass from one of the footpaths and she explained to me the strategy of using cattle to keep some types of plant at bay in order to encourage heather to grow because it attracts so many species of butterflies.

Climbing up onto the high heathlands gives a great feeling of open spaciousness, despite the fact that there are houses not too far away.  You could easily feel that you are out in the wild country rather than in a town.  Here, the snow had settled well into the worn grooves that make up the footpaths and with a blue sky as a fitting backdrop, you can’t help but stop and drink in the scene.

From this high vantage point, there are amazing views across the conurbation that is Poole, even reaching in the far distance to Poole Harbour and beyond.  It’s strange but mention Canford Heath to a walker and they will immediately think of the heath on which I am stood, but mention Canford Heath to a non-walker and they will almost certainly think you are referring to the housing estate below me.  I remember a time when all was heathland and I used to walk my dog for miles across it but I guess the need for houses overtook the need for open space.

Once again, I just feel gratitude to those who give time and energy to preserve these last vestiges of Dorset heathland. 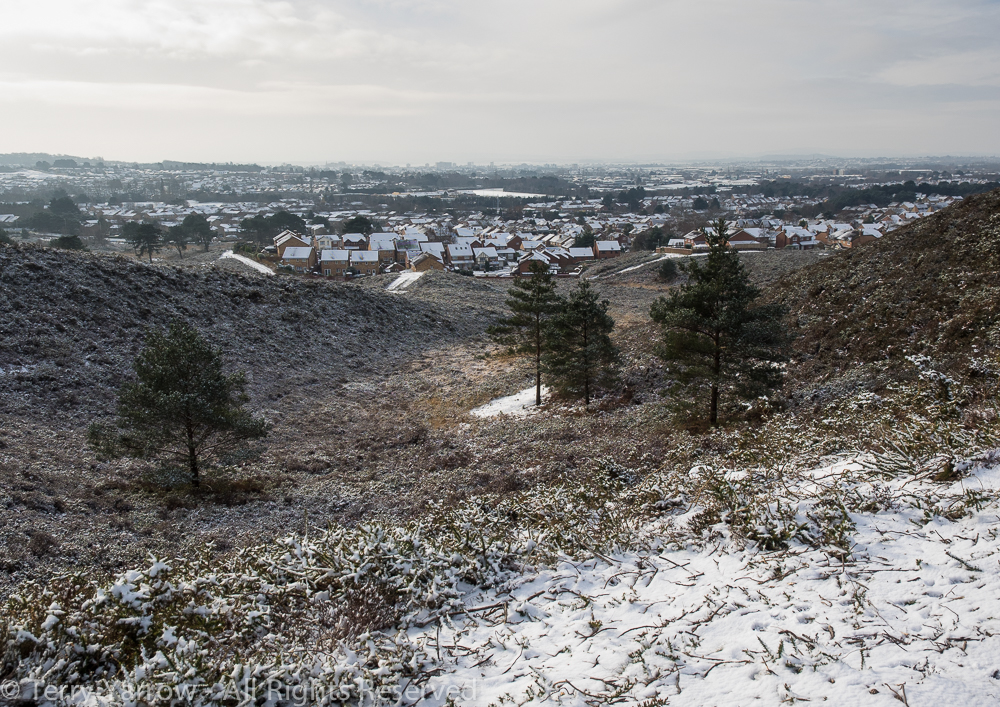 Dropping northwards off the high heathland down one of the myriad criss crossing paths you can almost seem to hear the rumbling of Lady Wimborne’s carriage echoing down through the ages as she drove across what was her estate.  Back in the 19th century, Lord and Lady Wimborne lived in what was then Canford Manor and owned most of the area.  The carriageways that they drove are the footpaths we now walk.

Rain is far more a feature of our winters than snow, and there are still many waterlogged areas to negotiate……..although they do look quite attractive surrounded by snow, lovely stands of birch, and of course those long grass stems, a relic of last summer.

I have written often about the delights that can be found if we just keep alert to all that is around us and we so often miss things on the ground or up high.  And even now in the depths of winter, there are reminders of an autumn long gone.  Beautiful oranges and browns amidst the white and the mud. 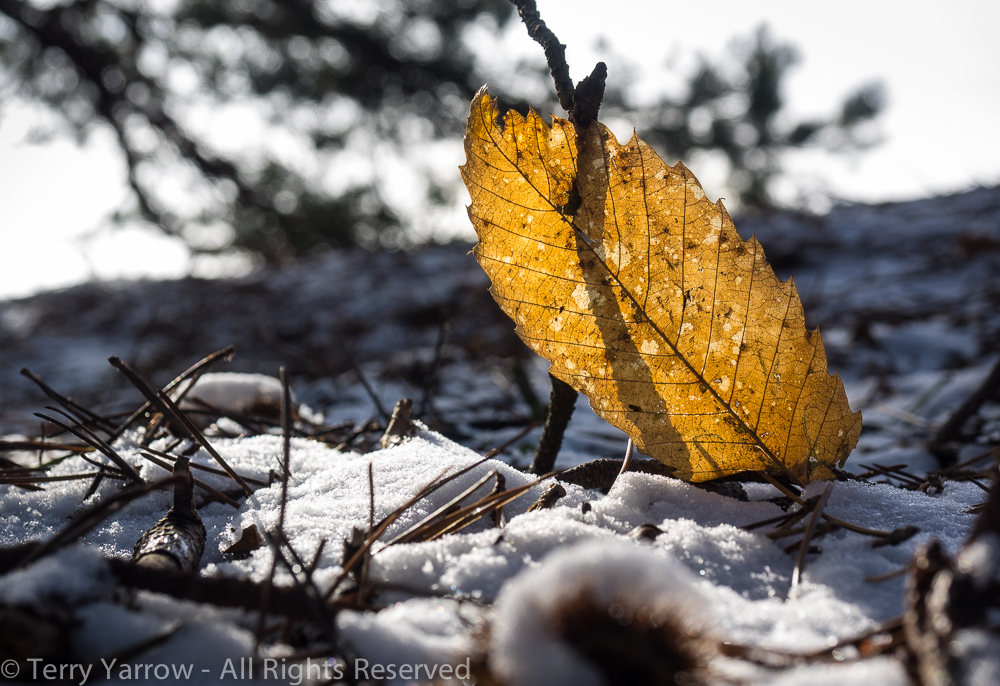 With the gentle warmth of the sun, our transient layer of snow was already fading as I climbed up once again to the higher ground to make my way back.  The very sun that melts the snow also brings out it’s pure brightness, making the paths stand out starkly from the darker surrounding foliage.  A dog walker slowly makes his way up onto the heath, standing out, black against white with a beautifully atmospheric backdrop of winter light. 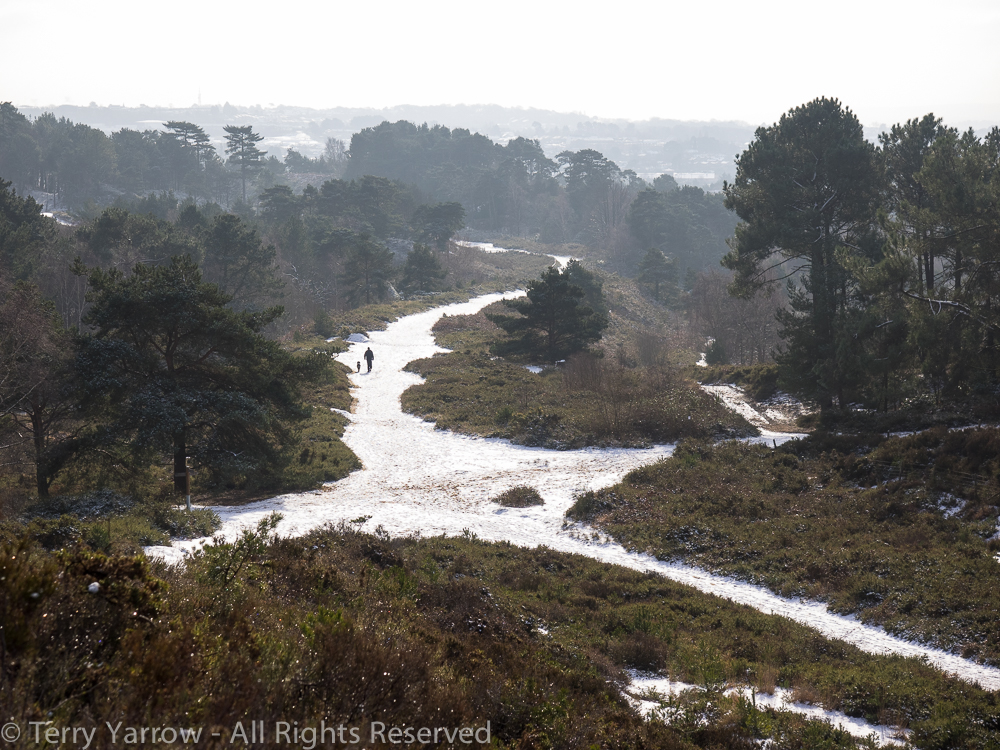 What a wonderful walk.  Snow may not come often but it brings a completely different feel to our local countryside when it does…….even if it is but a brief visit.