This was a walk with a difference – I had company, and just the best company too :)!  Because I mostly walk during the week, I normally walk alone which is fine because I am quite happy in my own company and besides, you are never really alone out on the trail because you always bump into some interesting people along the way.  But this time my son Paul and his lovely wife Laura came with me :)!  Now Paul is a best friend as well as my son – we are kindred spirits, and the three of us make a great team out on the trail.  And what a great walk we had!

It started in some beautiful meadows, famous meadows in fact, with bluebells everywhere and even an orchid or two!  Plus of course lots of orange tip butterflies, so called because their wings have……..orange tips!!

An Early Purple Orchid with bluebells

There were several ponds along this 16 mile walk, some man made and some natural…….in fact there were some ponds on the footpath itself because of all the rain we have had recently – but more of that later!  The pond below is actually part of a fishery and it is in a beautiful setting in a small hamlet.  Overhanging the pond and tied to a tree branch was a swing which just needed someone sat on it to create a prize winning photograph.  We tried to persuade Laura to pose on it for us but for some reason she declined ;)!

A swing just begging for someone to sit on it 😉

After all the rain we have had recently, everything looked so beautifully clean, fresh and lush.  In fact we decided that the word of the day should be VERDANT because everything everywhere was just that!  At one point we dropped down through a valley and the light coming through the tress threw such lovely shadows across all the greenery – it was just magic!

Verdant, the word of the day!

Mind you, that rain brought problems too as the paths in many places were extremely muddy or even impassable because they had ‘ponds’ of their own.  On occasion it meant detouring off the track and following an obstacle course over fences and through hedges just to get round the obstruction.  It was either that or take off the shoes and socks and paddle!!  I did suggest to Paul that he should do the gallant thing and carry Laura through the puddles, but we climbed fences instead ;)!

Part of the obstacle course 😉

Apart from puddles and ponds, something else we had aplenty was clouds, lots of fluffy white sky sheep swimming across the deep blue swimming pool of the sky.  Very photogenic!

Fluffy sky sheep – or is that an airship?

Half way round our circuit we passed the lovely Manor House in the picture below.  It sits in an idyllic position in a tiny hamlet in a beautifully picturesque valley, and it was clearly well looked after.  We met the current ‘lord’ of the manor – although he is not really a lord any more, just a wealthy person.  He was another of those friendly country folk that I so often seem to get talking to on my travels and he told us a bit about the house and the hamlet it sits in.

It was once a village with around 100 inhabitants but with the declining manpower needed to run the farms, it is now down to a small hamlet of about 16 people.  The Manor House itself dates mostly from the 17th century and at one point it became almost derelict.  So much so that an underground spring actually ran through the lounge which was very useful to the local pig farmer who took his pigs into the lounge to be slaughtered so that the blood would be washed away by the spring!  A bit gruesome but it is part of the history and heritage of the now restored Manor.

The hamlet has its own church dating from the 1870’s and this too is now owned by the current ‘Lord’ of the Manor who paid the princely sum of £50 for it not long ago.  It has to be maintained in good order as a church so it’s great that he felt able to take it on and preserve a part of history that might have otherwise become derelict! 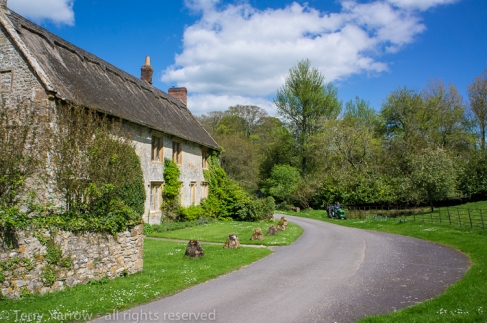 Shortly after passing the Manor, we came across another pond with some great photographic opportunities…….and Laura almost provided a great action shot opportunity for me, but she resisted ;)!  Paul is taking a photograph by the way so was oblivious to what she was doing ;)!!! 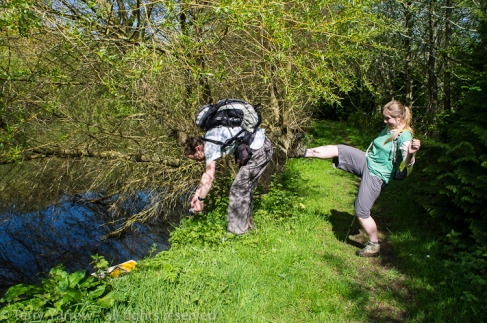 Go on!  There’s a great picture to be had!

Now normally, I try to avoid any convenience food or drink when on a walk, preferring to have my sandwiches sat somewhere in the countryside.  This walk however took us through a town and when we heard the chimes of an ice cream van, we couldn’t resist!

Ice cream time, even if it doesn’t go with the rugged outdoor image 🙂

This is another walk that takes in one of those sunken lanes and you can get a sense of scale from the picture below.  These lanes always intrigue me – it could be that it was formed simply by water running off the hills but I prefer to think of it as having been deliberately dug to make a route for smugglers carrying their contraband in unseen!  It really is an awesome place to walk!

As always, there were many sheep with lambs on the route and for the third time recently The Dorset Rambler came to the rescue of one little lamb.  There was a tree in the particular field which had a fence around it and somehow the lamb had found its way into the fenced off area and it couldn’t get out.  It was bleating pitifully and was throwing itself against the fence in an effort to escape – sheep are a bit dense I think!  With some difficulty because it kept running away from me, I managed to get it out and ran happily across to its mum…….and a good feed!!

Shortly after, we met another interesting character!  He was the local farmer who was using a JCB to dig a hole in the middle of one of his fields.  It seemed a bit of a random thing to do so we stopped and asked him, ‘Why?’  Apparently there is a network of land drains running throughout the field and one had exploded and needed repairing.  Without it, a verdant green grassy field would become nothing more than a useless quagmire!  He told us all about his farm which was several thousand acres of arable, sheep and cows, all operated by 5 people.  In the past of course that one farm would have been split into numerous smaller farms, each of which would have employed many men.  And of course the huge field we were stood in would have been numerous smaller fields too.  How times change with the coming of more sophisticated machinery!  With the loss of all those hedgerows that provided cover for much wildlife, the change is not all good! 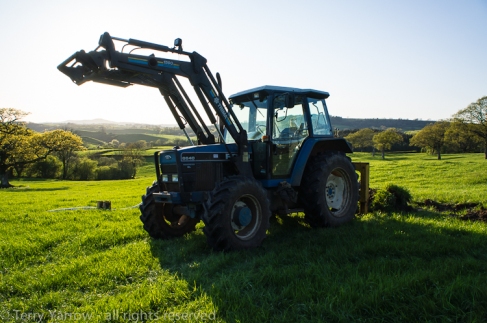 As evening settled over the countryside and the beautiful golden hour approached, we passed through another lovely wooded area.  How the scene changes at this magic time of day.  Even the conifers look picturesque with their new foliage uncurling!

Even the conifers take on a special beauty in the golden hour!

As we neared the end of the walk, the sun was setting and we dropped down off the hilltop and into the valley.  And there was just time for one more photograph, a reminder of a special day!  Memorable for great scenery and sun, memorable for lots of water and mud, memorable for fences climbed and lambs rescued, memorable for interesting and friendly country folk, but memorable most of all for the company of two great people who are close to my heart!