This was another lovely walk, 21 miles through the beautiful north Dorset countryside and some interesting things and interesting people on the way!

It started with two castles, an old castle and a ‘new’ castle!  To be more exact they are fortified palaces with the original one being built in the 12th century and destroyed by the Parliamentarians in 1645 during the English Civil War.  It was at one time owned by Sir Walter Raleigh having been gifted to him by Queen Elizabeth.  He originally tried to improve the old castle but in the end he gave up with that and in 1594 built a lodge which was eventually to become the ‘new’ castle.  Just as an aside, Sir Walter Raleigh fell out of favour with royalty and he was beheaded in 1618.  Apparently his head was embalmed and given to his devoted wife and it is said that she kept it in a velvet bag until her death some 29 years later when it was reunited with his body in his tomb!

Having passed the castles, the walk took in some really beautiful parkland with great paths to walk on – it made a great change after the muddy paths of recent walks.  I think you can just imagine royalty riding along these paths in their carriages, or whilst out with the hunting parties.

Shortly after exiting the parkland, I came across the first of the ponds – or rather a series of small ponds.  They were in a beautiful setting on the edge of a village beside a farm and it wasn’t clear whether they were private or not.  They weren’t fenced off and there were no signs so I took the opportunity to grab a picture or two.

On this walk there were many rape fields, and very beautiful they were, like bright yellow table cloths laid out ready for a spring picnic.  It seems really strange that these crops which are so pretty bear a name which has such horrible connotations and it made me wonder where the name comes from – it apparently derives from the Latin word for turnip!  The fields do seem to be particularly vibrant this year!

Whilst I was walking, they were spraying the crop….which concerned me a little!  I am not sure what they spray it with, but I am sure that it is not intended for human consumption particularly when it is in neat form.  Fortunately the day was still and I was able to avoid getting too close so I managed to avoid breathing it in.  On the plus side, it was interesting watching what looked like an aeroplane driving up and down the fields…….and of course it gave me a nice focal point for a picture :)! 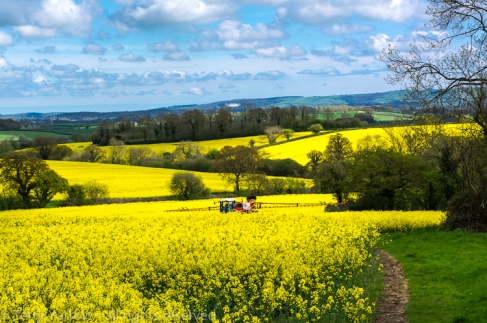 It wasn’t long before I came across the second pond, a much larger affair than the earlier pond and equally beautiful.  The public footpath circled right along the bank so I was able to enjoy the labours of the landowners.

The pond was part of the grounds of a ‘manor’ house (I use inverted commas as I am not sure that it technically qualifies as a manor although it was a very large house with many acres of land) and in fact the ‘Lord and Lady’ of the manor were showing some friends around their grounds.  The ‘Lady’ and I fell into conversation and I commended her on the beautiful grounds and she was very quick to give the credit to others, saying, ‘We have a good gardener’.  She also told me that they had recently improved the stiles across their land which is quite refreshing as many landowners neglect the public footpaths that they are meant to keep in good order!  These were lovely people and I bade my farewell and moved on.

A beautiful place for a public footpath

There were a number of lovely village churches on this walk.  The church below was renovated in the late 1800’s and when the survey was carried out, it was discovered that most of the church, including the tower, had only one foot of masonry below ground and virtually no foundations.  The restoration improved the situation and the church still stands although as you can see in the picture below, the walls lean at a slightly crazy angle! 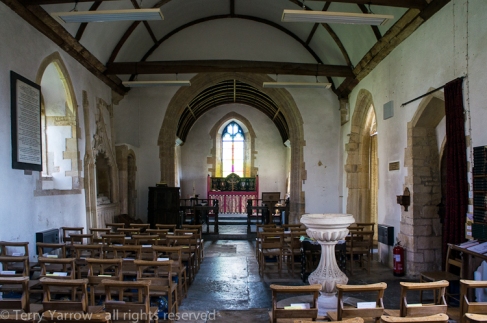 The church with leaning walls

One of the interesting things about this church is the east window which is ‘stained glass’ but more modern than the other glass in the church.  It depicts the crucifixion scene and Christ’s tomb.

The church also contains a 15th century tomb with an alabaster effigy.  As is often the case, this is partly set within the wall of the church.  I was impressed with modern technology when taking the picture below :)!  Cameras these days often have face recognition so that they automatically focus on the face if there is one in the picture.  Well, my camera automatically focussed on the effigy’s ‘face’ even though it barely has one! 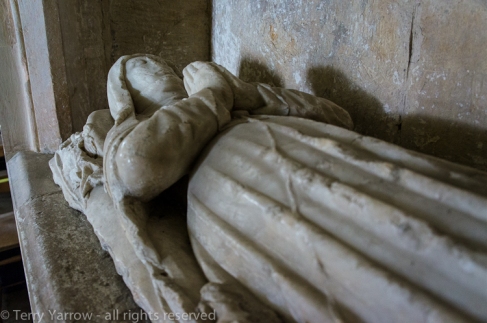 At another church just down the road, I noticed a strange sign!!  The church was locked but the sign indicates that the key is available in the porch of the farmhouse on the left……and promptly points to the right :)!

How does that work – left, right??

During the afternoon, the route took me through the most delightful woodland which was beautifully brought alive by the afternoon sun.  All the trees were dressed in their brand new clothes and were stood on a lovely bluebell carpet.  It was a quite magic part of the walk!  Strangely, I fancy the carpet is not so blue as it usually is – perhaps it is because of too much rain and not enough sun!

Spring greens on a carpet of blue

A perfect place for a spring walk

Towards the end of the day, I passed another two tiny churches.  The first one, pictured below, was in a delightful little hamlet which was typically Dorset.  The second one was in reality only part of a church – just the chancel.  The rest of the church has long since disappeared!

Having looked around the outside of this second church, I decided to go in but the door was jammed and as I tried to push it open, a voice came from inside saying, ‘Hold on’!  Shortly after, a man opened the door for me.  At first I thought he was the cleaner but it turned out that he was in fact a homeless man who had lived, or rather slept, in that little church for 7 years!  Some might say that it was inappropriate for him to be there but he was doing no harm to either the church or anyone around – he was just using it as a night shelter.

He was another friendly individual who told me all about himself – both his parents had died 10 years earlier and it had sent him into a tailspin that resulted in his losing his home.  He talked about the difficulties and challenges of being homeless and the freedom that it brings too.  How the summer is easy once you get used to having no home base, but how winter is so difficult because of the cold.  He told me of winter nights when he just had to walk all night to keep warm!  He was in his sixties and now claiming a pension and the prospect of another winter sleeping rough at that age was not appealing!  In addition to that, he had that day lost his glasses so was unable to read – I felt for him!  One unusual thing about him was that he didn’t touch alcohol – he must be one of the few homeless people who don’t drown themselves in drink to help them cope with their lifestyle!  We chatted for quite some time – I think he was glad of the company – and he waved to me as I set off again down the trail. 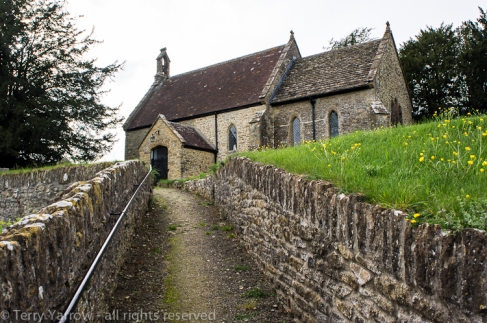 A little church in a Dorset hamlet

It was interesting, the total contrast in social status between the ‘Lady of the Manor’ and the homeless man, and perhaps just because of circumstance!  In my eyes, and God’s eyes, they are both equal and I enjoyed sharing part of my journey with each them.  Isn’t that what life is really about!  We rub shoulders with many different people on life’s journey – hopefully we leave a little something behind with each one as we travel.  These two certainly contributed to a memorable walk for me!

Thanks for reading the ramblings of The Dorset Rambler!