Well I’ve had some fantastic walks again this week despite the somewhat dubious weather, or perhaps because of it – it always adds variety when the weather is changeable.  This walk took in ridge tops, beautiful valleys and some very picturesque story book villages.

It started strangely when I realised I was walking backwards!  Well, not physically walking backwards as that would be very difficult, not to mention pointless, unless you had eyes in the back of your head – which I don’t…….although thinking about it, that would be kind of cool, being able to see where you are going at the same time as seeing where you have been (hmm, maybe I should patent that!)!

I realised something was amiss when I looked at my GPS which cleverly gives an estimated time of arrival at the final destination (the end of the walk) – it actually quoted the same time as it was when I started walking.  Now either I was doing a superman and walking at superhuman speeds without realising it, or something was wrong!  It could have been the first, but it seemed unlikely so I checked the GPS and discovered that I was actually walking my route the wrong way round.  That was easily corrected because these nifty modern aids to walking can reverse the route at the touch of a button – dangerous because usually when I touch a button it deletes everything ;)!  Anyway, all was well and I could continue happily on my way!

The first part of the walk was a long climb up to the top of the ridge, and then an equally long and steep drop down into the valley on the other side.  The views were amazing and even more amazing was the fact that there was no mud……although that would be more than made up for later!

At the bottom of the valley, I walked into one of the most picturesque, unspoilt and friendly villages in Dorset.  I stopped to look at the village church which was very old and very lovely, with what must be the most picturesque graveyard possible!  In fact it was so lovely that I sat on a seat in the graveyard and had my lunch.

Whilst I was there, I met a very nice lady who was tending her husband’s grave and we just naturally started chatting.  She had lived in the village for 51 years, since marrying her husband in fact as he was a villager.  She spoke of the pleasures of living in the village with lots of friends around her, but also of the hardships too.  She was elderly and becoming less mobile which could at some point pose a problem because there was now no public transport at all.  She was still able to drive but at some point in the future could become ‘village bound’!  The only village shop was the post office which opens on only two mornings a week but fortunately all the main supermarkets deliver so food at least would not be a problem.

Just as an aside, it’s strange that supermarkets make a big deal out of home deliveries like it’s a new invention – when I was at school some 50 years ago, I used to deliver groceries to earn myself some pocket money! 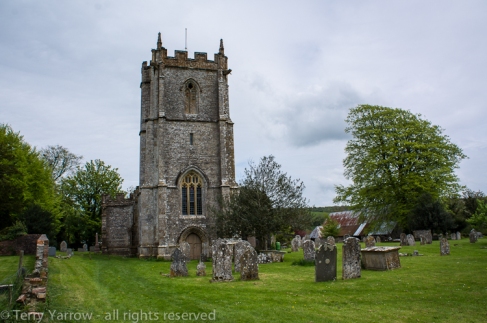 The church itself was old, with leaning walls, and yet somehow it stays up and is still regularly used.  It is well known for its variety of gargoyles, those grotesque carved figures around the top with pipes coming out of their mouths designed to carry rainwater away from the masonry.  There are a number of reasons suggested as to why they have grotesque faces rather that just a simple pipe – one suggests that in the days when most people were illiterate, the gargoyles would convey the story of good verses evil, and another suggests that they were simply a representation of the fact that evil is kept outside the church.  Either way, they are very interesting and add to the charm of these ancient buildings. 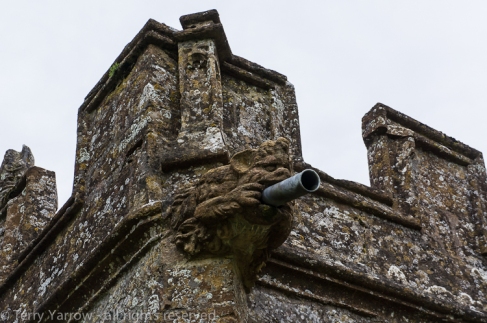 One of many grotesque gargoyles

The church is also one of the few with some old box pews remaining.  These were installed in churches from the 16th to the 19th century so that families could sit together and have a degree of privacy, sometimes to conceal non devotional activities!  Naturally the standard of pew would be suited to the social standing of the family with some having curtains and tables and even fireplaces, in fact they were passed down the generations in wills!  Of course the best and the one nearest the front would be reserved for the Lord of the Manor, whilst lesser mortals would have quite a small affair somewhere near the back!  Perhaps it is a good thing that most were ripped out in the 19th century! 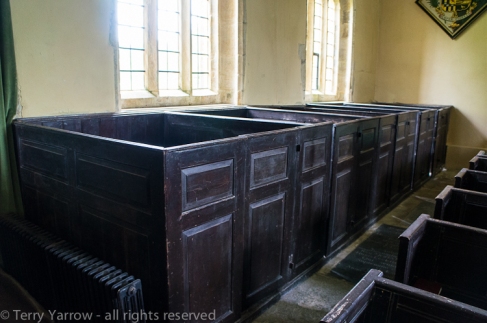 I had to leave the church and go on my way again but I hadn’t gone far before I met another villager.  He was a farmer who ran one of the five farms in the village (very strangely, at one time one was an ostrich farm)!  It was milking time so the farm workers were bringing the cows down from the fields to the village farm to be milked.  To do this, the cows had to be brought through the village lanes which meant stopping traffic.  It was once a common thing to be held up in your travels by herds of cows but sadly these days it is quite rare because today 90% of our travelling is on motorways or bypasses.  I say ‘sadly’ because I think it is a lovely reminder of times when the pace of life was slower!  It is also a good sign because it means that summer has arrived – in the winter the cows are in the barns and not the fields!

A welcome sight – summer is here!!

To make sure that the cows don’t stray where they shouldn’t (well it wouldn’t be popular if the cows trampled all over the beautifully manicured gardens), the farm workers put rope across the various openings, including across the road at junctions.  Now if you are a driver, it’s not easy to see a thin rope across the road and a car nearly ran into it, braking only at the last minute!  So the farmer asked if I would help by standing there and herding the cows in the right direction, which I gladly did.

Whilst waiting for the cows to arrive, we got chatting.  He told me that farming had run in his family for many generations, back to the 17th century in fact, and always cattle and the sons had always followed in their father’s footsteps.  His son was an accountant in the city, but even he wants to return to the farm at some point and take over the family business.  The farmer gets up to milk the 170 cows at 5.00am and milks them again in the afternoon, 365 days of the year.  I asked him if he ever tired of it but he said no, he loved his work and his way of life, being on the farm and with nature too.  I could understand what he meant!

What seemed strange to me is that the cows have calves to stimulate the milk flow but the calves are then quickly weaned so that the milk can be taken for human consumption – although I gather they are given a small amount still.  The milk yield gradually decreases through the year and then next year the cycle begins again!  An interesting fact that the farmer told me was that if a cow has two calves, one male and one female, the female is always infertile!  It’s amazing what you learn on a walk :)!

When the cows were all in, I bade my farewell and continued up the road to be greeted very soon by a couple of interesting sights.  The first was an old ford where the tiny stream crosses the road – I could just picture in my mind horses drinking at that ford in days of old as they made their way to market!  I gather that in addition to enabling cars to cross the stream, the ford has also on occasion been used by the locals in conjunction with a bucket and sponge as a free car wash!  What seems unbelievable looking at the tiny stream is that in the 19th century a man was washed downstream and drowned, such was the strength and depth of the water then after a storm.

The car wash……or is it a ford!

The other unusual sight was a post box attached to a pole.  It was unusual in that it was an Edward VII post box, but more than that, it was unusual because of the sign on it.  It said, ‘Please do not use this box until further notice as birds nesting’!  Isn’t that cool that modern life still stops sometimes for nature! 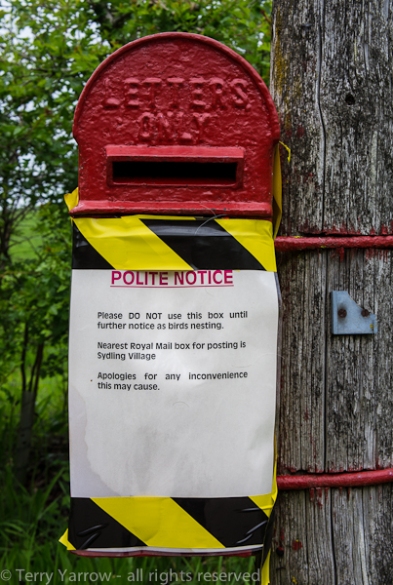 A little further up the trail, I came across the most magnificent barn.  It was huge and was right at the top of the valley with amazing views from the doorway.  I was really surprised, and delighted, that no one had converted it to a house – which seems all too common with barns these days.  It would certainly be a great place to live.  And then I realised that someone does live there – a family of kestrels!  They were nesting high up on one of the roof beams and I could hear the chicks loudly voicing their need for food!

Having climbed up to the top of the valley, I crossed the ridge and dropped down the other side again, just as the rain came on!  And I came across another delightful hamlet nestling in the valley with its little church sitting on its own in a meadow of dandelions and buttercups.  It always enriches a walk when you come across these little unexpected treasures, and this was certainly a treasure with its rather unusual tower looking as if it was an afterthought! 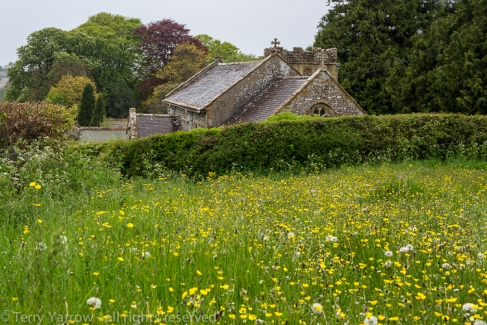 The church in the meadow, with its ‘after thought’ tower!

So, back to the mud!!  And boy, were the last few miles muddy!!  So much so that at one point I sank in up to my knees – I got soaked.  Its funny how it slows you down as it is not easy to get into a good stride when every time you put your foot to the ground, you sink in – it’s like walking in jelly…..but definitely not as tasty!  And even when you get to the other side, you still squelch for the rest of the day because your shoes that are meant to keep water out are now keeping it in ;)!  It was still great though with some unexpectedly interesting things.  Like the old railway bridge that the route goes under.  The railway closed many years ago and the bridge has been colonised by that gorgeous orange lichen – I thinks its called Crustose lichen.  Very photogenic!

And then the last thing to pass was the cleverly disguised trunk below.  It seems to have been carved out of a single tree (a trunk carved from a trunk in fact!) and contained what was once a usable note book and pen, a sort of visitor’s book to be signed by all who pass.  Sadly the heavy rain has not only filled the footpath!

What a great walk!  So much of interest and interesting and friendly people too!  Another day, very well spent in this amazingly beautiful county of Dorset!