I was up before 6.00am again and had my ‘snack’ breakfast before packing ready for the day.  Last night there was a very heavy dew so the tent was wet again.  I made my way back to the coast path where I left it last night and walked along a lovely bluebell strewn path in some woodlands. 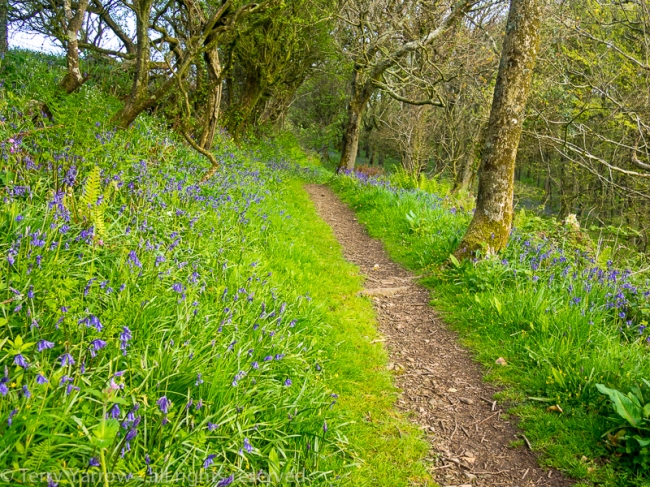 Although the day started out cloudy, the sun soon appeared and it was glorious for the rest of the day.  The walking was much more level with just small undulations rather than the steep climbs that this coast usually offers.  The cliffs had changed too, with the granite of the northern sections having given way to a much softer red sandstone. 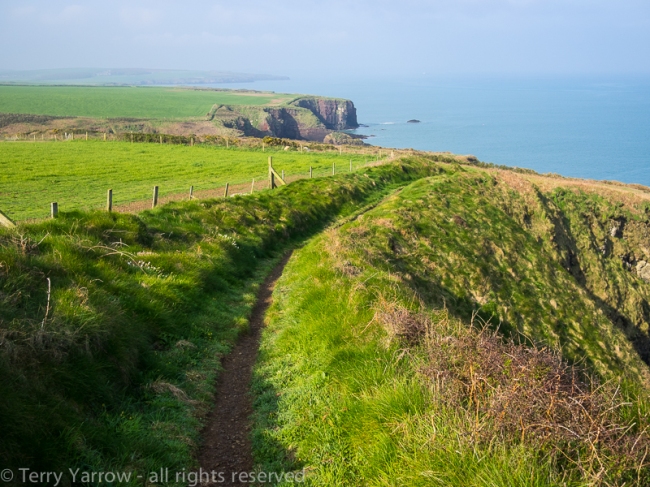 Spring flowers lined much of the path again and the views from the cliff tops were truly amazing.  I crossed the interestingly named inlets of Brandy Bay and Dutch Gin – probably named from use by smugglers – before dropping down to the lovely little cove of Mill Haven with its wooden bridge across the stream. 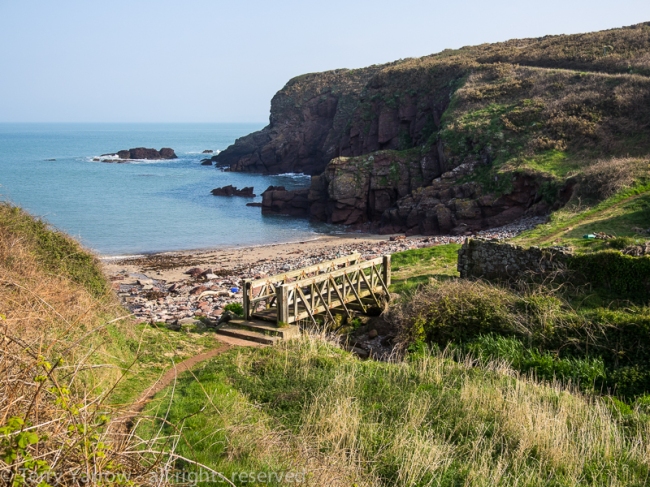 Shortly after, I passed the interesting rock in the picture below.  Apparently it is a sculpture by Alain Ayers and is called ‘Eyes of the Sea’ – it seemed a strange place for a sculpture but I rather like the randomness of its location on the coast path with no access other than by foot. 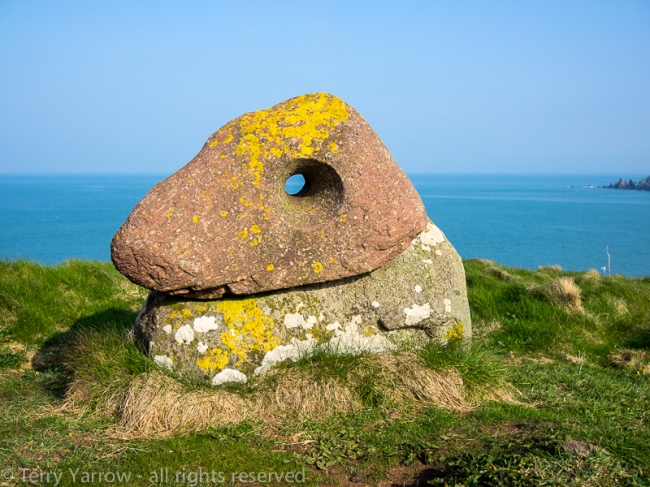 Eyes of the Sea

After some time I dropped down into the fascinating inlet of St Bride’s Haven.  St Bride’s itself is a delightful place with its Norman church, lime kiln, parklands, grassy picnic areas and St Bride’s Castle, once a stately home but now holiday accommodation. 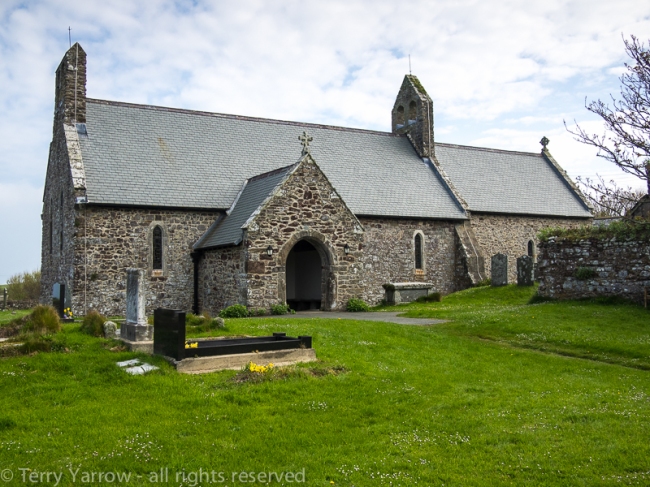 The views across the bay are lovely and I took the opportunity to sit for a while.  Once again, the red sandstone was very evident. 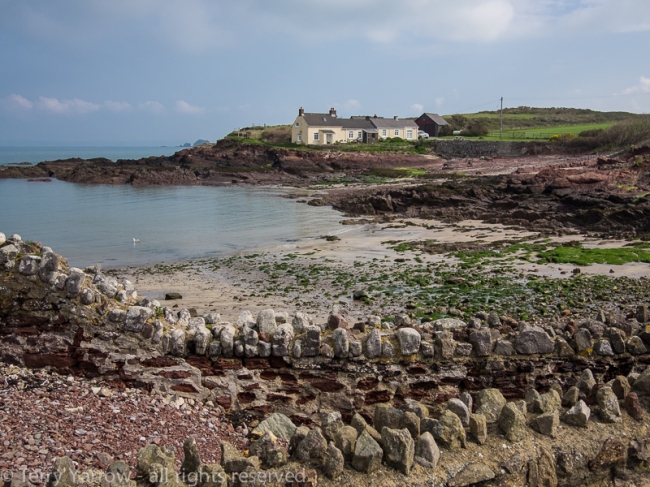 From St Bride’s, the coast path follows the perimeter wall of the old castle parklands for some time but eventually I left that behind, reaching the beautiful unspoilt beach at Musselwick Sands.  The beach is accessible from the cliff top but looked pristine as though no one had been there for some time.  The sand looked like pure virgin snow.

Beyond Musselwick I passed the camp site that I had intended to stop at for the night but I kept walking as the day was too beautiful and the walking too good to stop so early.  I reached Martin’s Haven which is the mainland landing stage for the Skomer Island ferry.  There were probably more people here than I had seen all day as they queued for the next boat. 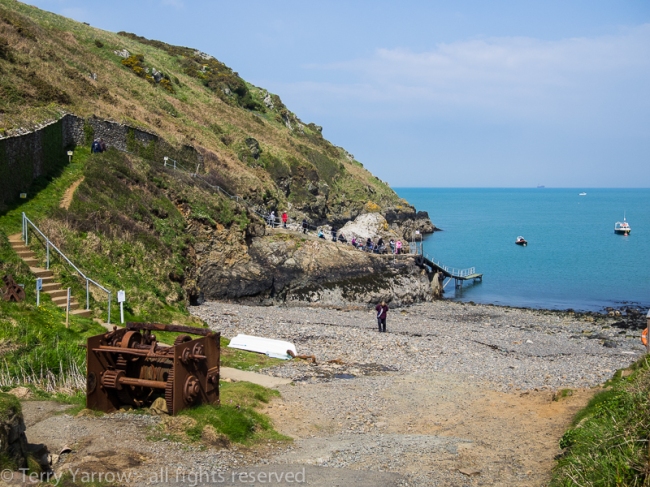 I continued up the other side and decided to break for a while at the Haven Point coastguard lookout post.  It was a very warm day and I did what I always did at this time of day……took off my shoes and socks (wet from the dewy grass) to cool my feet, and then replaced the socks on the other foot.  This is a good tip for refreshing hot feet.  The view from my rock ‘bench’ was amazing, taking in the whole of Skomer Island.  The island is another wildlife reserve and is famous for its population of Manx Shearwaters, Puffins and Skomer Voles……..plus visiting humans of course. 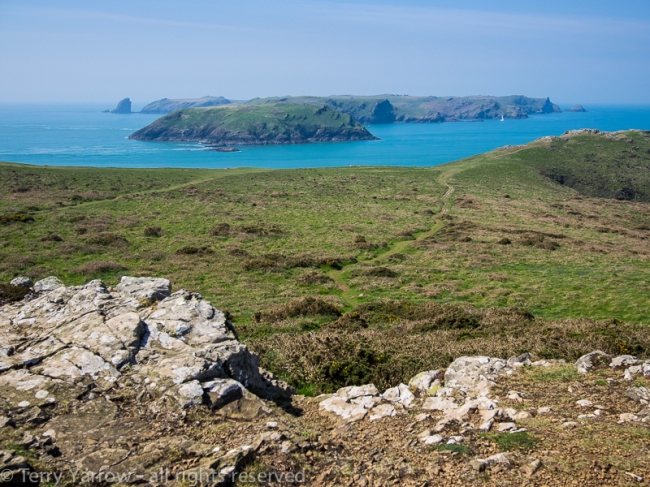 Skomer Island from my rock ‘bench’

Just a few miles later, the awesome view below came into sight.  This is the wonderful Marloe Sands and my onward footpath wound around the cliffs overlooking the beach.  The tide was out and the sand looked very inviting as I walked around the perimeter until I reached the point where my path turned inland to Marloe village which I had decided to make my stopping point for the night. 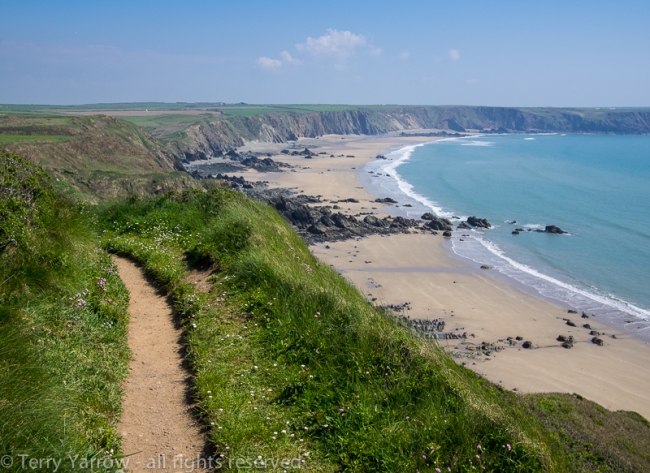 The village was over a mile inland but was well worth the detour as the camp site was probably one of the best I had experienced having lovely hot showers, a laundry, tea facilities, and a local pub.  Not only that but it had free wifi and I sat at one of the picnic tables with a pot of tea and spoke to my family using Facetime – a very civilised way to camp 🙂 !  The day was still very warm so I was able to spread all of my clothes out on my ‘clothes line’, also known as grass, to dry/air.  You can see from the picture below that I virtually had the campsite to myself with just one other couple being camped there. 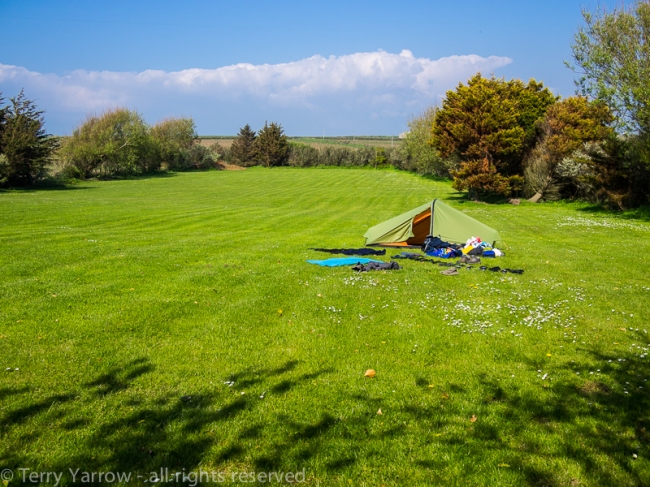 A lovely campsite at Marloe

Early in the evening I walked to the pub for a meal and a well earned pint, and watched football on the TV.  While I was there, I got talking to a couple from Holland.  They were over for a 4 day walking holiday along the Pembrokeshire Coast Path and I wondered how they found walking this switchback of a footpath with all its steep climbs when they lived in such a flat country!

The walk back to the tent in the gathering dusk was delightful.  It was a beautifully still, balmy evening and there was birdsong all around.  I could also hear the soft booming of the guns firing on the Castlemartin Firing Range – I would see that at close quarters later in my walk.

After the beautiful sunshine of yesterday, today dawned cloudy and grey.  I was up just after 5.30am and ready to hit the trail again before 7.00am because today time was more critical than usual.  The reason was that in today’s 15 mile stretch there were two inlets that would only be crossable at or near low tide – failure to get it right would add over 6 miles to my day.  I had already consulted the tide tables and I hoped my calculations would prove correct!

It didn’t take long to regain the coast path and I rounded Marloe Sands again, looking somewhat different as the tide was in, obliterating most of the lovely beach I saw yesterday.  I passed a large disused airfield and reached Westdale Bay with yet more red sandstone cliffs.  It was strange standing looking across the bay in the picture below – down the valley I could see the houses of Dale, the next town on my route, and I could have reached it in 20 minutes down that valley.  My route, however, took me round the headland, meaning that I would in fact not reach Dale for another three hours. 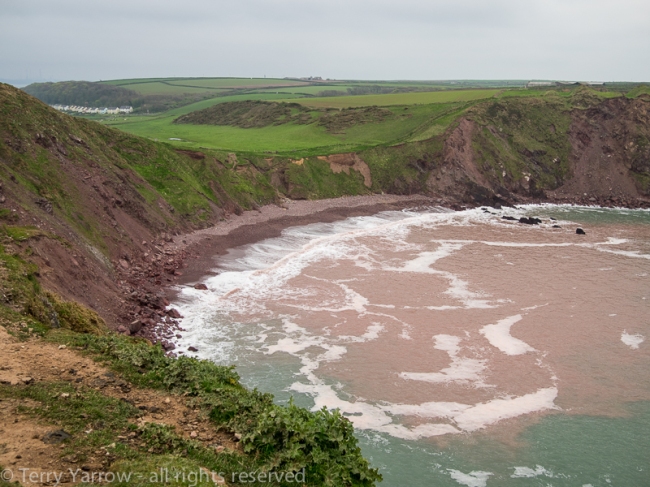 I knew that I would regret it if I took the short cut and I continued round the coast, eventually reaching the southernmost point at St Ann’s Head.  This is a really interesting place with its two lighthouses, one of which was converted to a coastguard lookout but is now holiday accommodation.  It also has a row of coastguard cottages, walled garden and helipad.  Oh and by the way, if you fancy owning the old lighthouse in the picture below, it seems to be on the market for £975,000! 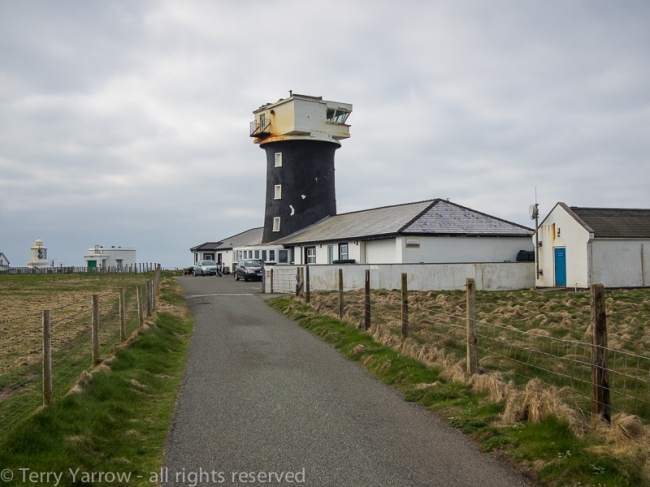 Just below the lighthouse, at Cobbler’s Hole, are the most amazing rock formations and I took a quick detour along the dedicated path to get a better view.  Turning north again, I quickly reached Mill Bay, famous for being the landing place of Henry Tudor in 1485.  He landed with 2,000 men and marched through Wales for 15 days before fighting the Battle of Bosworth Field’s, winning both the battle and the English crown. 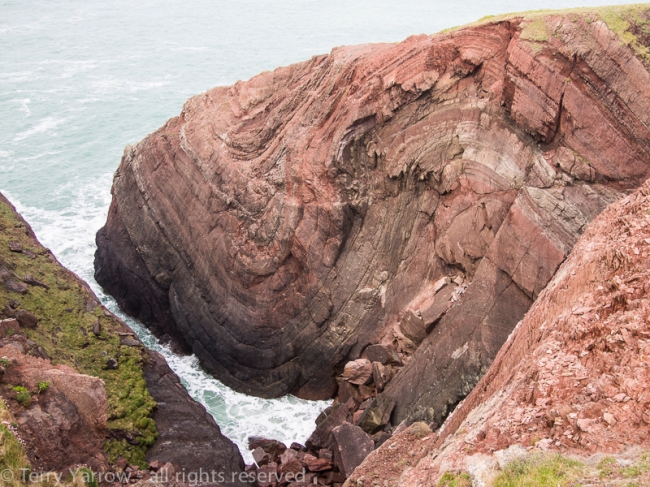 Mill Bay is not the only connection with war on this headland.  Having circled the bay, I came across an old fort at West Blockhouse Point and decided to take a look.  It has in fact now been converted to holiday accommodation by The Landmark Trust and I was lucky enough to bump into the current guests who invited me to have a look around the outside.  The entrance to the accommodation is via a drawbridge and the views from the battlements across the entrance to the Milford Haven harbour were awesome.  It was of course that very harbour entrance that the castle was built to protect. 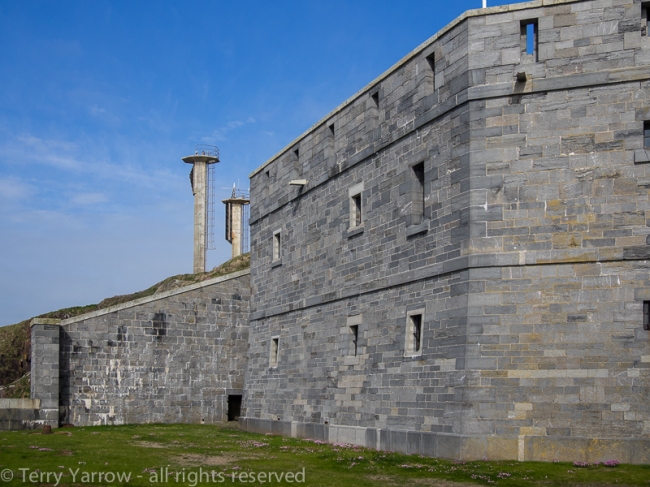 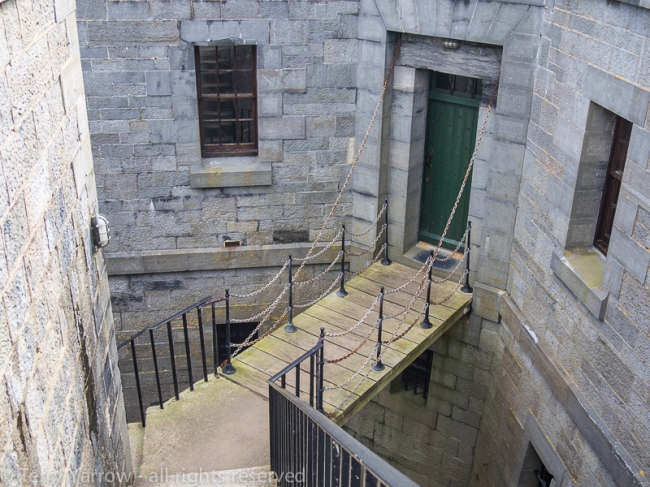 We stood chatting on the battlements for some considerable time but my time was pressing so I thanked them for allowing me to invade their privacy and continued on my way, finally reaching Dale and just beyond, my first low tide crossing point at The Gann.  I walked out along the Pickleridge, a ridge reaching most of the way across the inlet, and was pleased to see that the boardwalk was exposed and passable.  Upstream at this point are flooded gravel pits, a relic from the building of airfields in the war years. 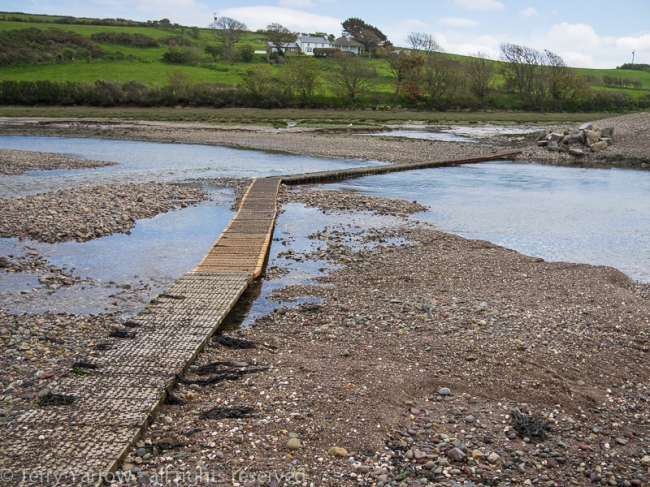 I knew that since The Gann crossing was exposed, my second low tide crossing would also be exposed but of course that was several miles away and would take me a couple of hours to reach.  There is some leeway either side of low tide and indeed, I had planned the day so that I would cross The Gann as the tide was still falling, but to be on the safe side I strode on.  By now the sun was out and I briefly stopped to explore the old watchtower that overlooks Monk’s Haven, a rather lovely beach with a high castellated wall at the high water mark. 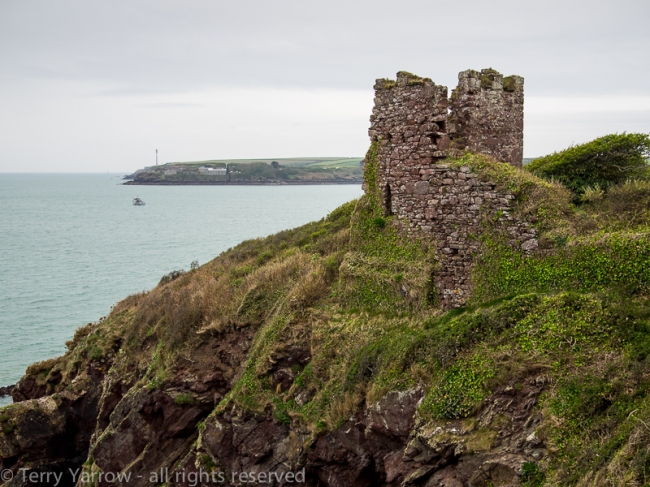 The Victorian watchtower at Monks Haven, with St Ann’s Head behind

Shortly after leaving Monk’s Haven I met a young man walking in bare feet and we got talking.  He was from Denmark and although he had shoes attached to his rucksack, he preferred to feel the ground beneath his bare feet.  On this stony path my feet were sore even though I was wearing shoes!!  This was another part of the coast with many wartime relics, but also lots of beautiful Sea Thrift.  It looked particularly lovely in the sunshine with a backdrop of oil seed rape.

As I rounded the last headland of the day, I was pleased to see that the tide was still out and the stepping stones across Sandy Haven Pills were exposed.  I dropped down to the slipway and crossed the dry inlet, turning to take a photo to record the scene.  Sandy Haven itself comprises only the few cottages in the picture below on the western bank of the river, and my camp for the night which sits on the headland above the eastern side of the river. 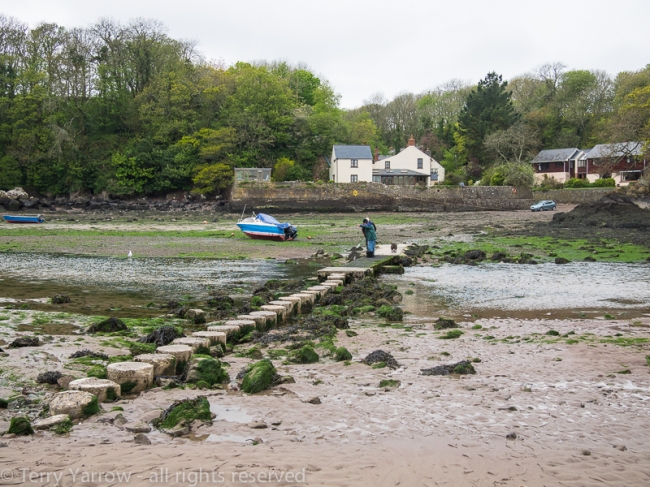 By now, it had started raining again and I quickly made my way up to the campsite to pitch my tent.  With no village pub anywhere near, I ate what food I had with me, sat in the tent listening to the rain.  Later in the evening during a break in the weather, I walked back down to the eastern slipway and took the photographs below – the scene was somewhat different and I was glad I had calculated my times correctly to cross the river when I did! 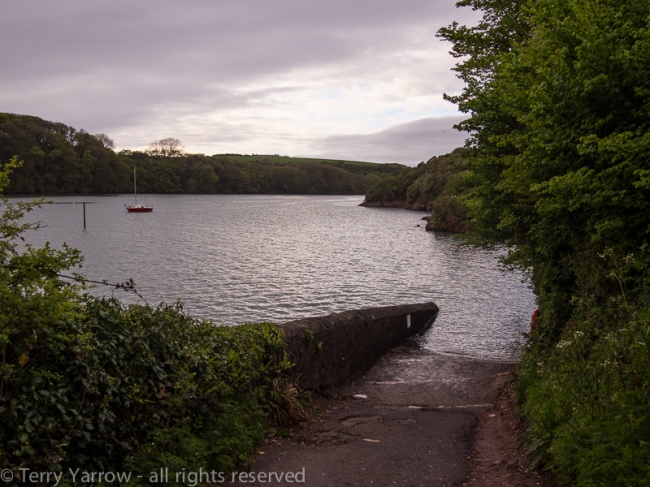 That night I lay in my sleeping bag listening to the rain on the tent, grateful for a great day’s walking and good timing, and wondering what tomorrow would bring.  I would be leaving the wild coast and moving into a more industrial part as I entered the Milford Haven area.