I woke at 6.00am after a slightly chilly night and just as I was dressing and thinking, ‘I must pack before it starts raining’………..it started raining!  Not heavily but enough to make the tent wet, and therefore heavier, before I put it away.  I was out on the coast path again before 7.00am and the first few miles were easy walking.  I passed the rather interesting gateposts in the picture below! 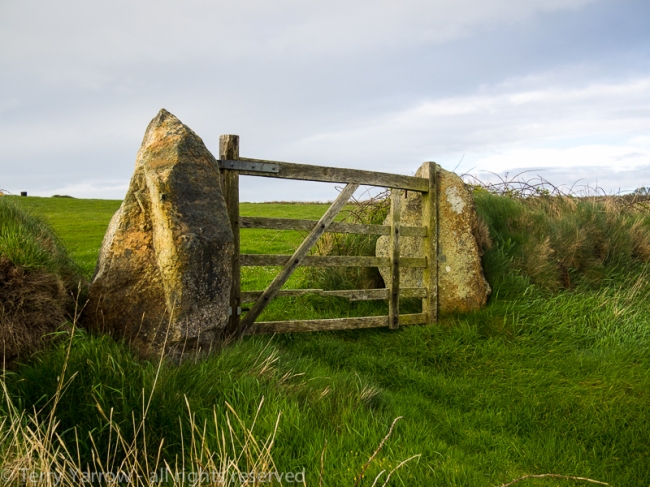 After a short time, I stopped to look back across Porthselau and Whitesands Bay beyond with rolling waves still pounding the cliffs.  St David’s Head and it’s summit of Carn Llidi stood proud as if it was watching over the two bays.

The rock formations were awesome with huge slanting slabs of rock dropping down into little coves and inlets.

The day was beautiful with lovely soft early morning sunlight and the walking was easy, level cliff tops laden with spring flowers.  A cultivated flower garden could not have bettered this wild one.  It was a delight to walk through and I lingered as I went.

A beautiful wild garden along the cliff top path

At Porthstinian, I passed the lifeboat station which serves this part of the coast.  It is well protected in this narrow cove. 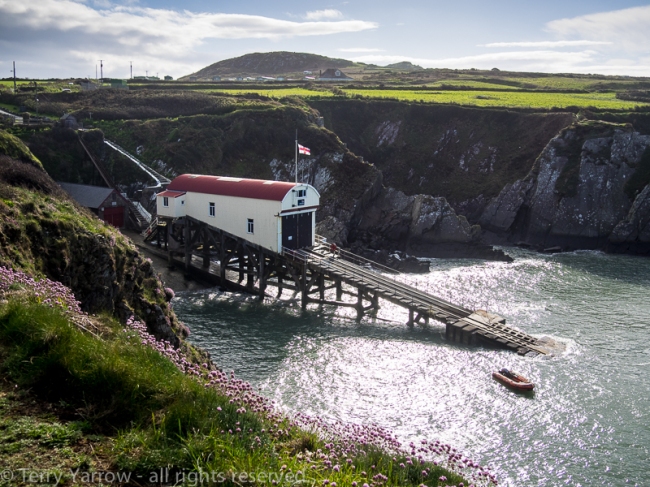 Indeed, this is a protected part of the coast, being partially sheltered by Ramsey Island which stands just off shore.  This island which is less that 2 miles long is owned by the RSPB and is inhabited only by the warden and his wife……..and of course the birds!  The island was my company for several miles.

After some time, I dropped down into the delightful harbour of Porth Clais with its four well preserved lime kilns and old harbour wall dating from Norman times.  This was the harbour for the city of St David’s, used by saints and pilgrims in the distant past and in the more recent past by trading vessels, and even more recently by pleasure craft and fishermen.  This is a very old port but in terms of more modern things…….it has a small kiosk cafe which I was pleased to make use of :)!

This was a lovely place to spend some time and I sat on the harbour wall drinking in the view (and a cup of tea) and imagining what it would have been like when the saints of old landed here en route to St David’s.  It amazed me how the water level changed between high and low tide as the harbour was completely dry and yet the tide marks show that it fills up when the tide comes in.

It was soon time to move on and I climbed out of the harbour and back onto the cliff top, soon coming across another interesting feature, St Non’s Chapel.  St Non was the mother of St David, patron saint of Wales, and she gave birth to her son around AD 462 on the spot where the chapel was erected.  Nearby stands St Non’s Well which was thought to have healing powers.

Leaving the chapel behind, I continued along the coast to Caerfi Bay, passing the newer chapel on the way.  I had intended to stop here overnight to leave time for some chores but as it was so early, I decided to walk on a few more miles.  Eventually I reached Porth Rhaw where I turned inland to find a campsite which I did at Nine Wells, so called because it has or had nine wells.

Having put up my tent, I decided to walk into the city of St David’s, the smallest city in Britain, as I knew there would be a laundry there.  I walked the two miles to the city and just as I passed the first house, I realised that it was sunday and they would all be closed!   Ah well, it wasn’t a wasted trip as I was able to eat there and charge my phone. 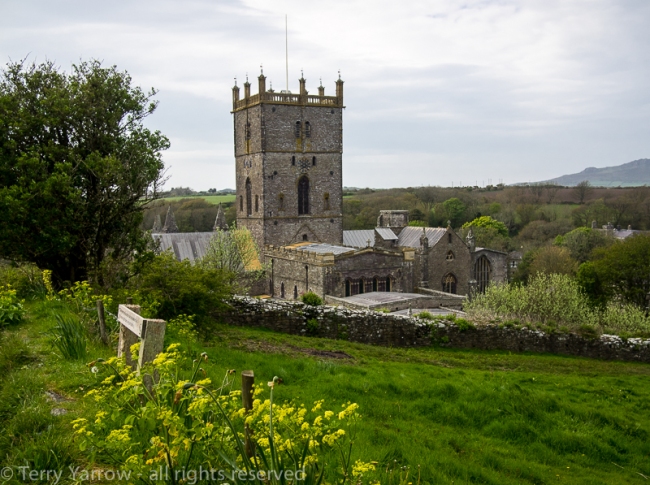 Another early start and by 7.30am I was packed up and on my way back to the coast path on a beautiful sunny morning.  Walking back down the valley from my camp at Nine Wells to Porth Rhaw was a wonderful start to the day, a feast of soft sunshine and bird song. 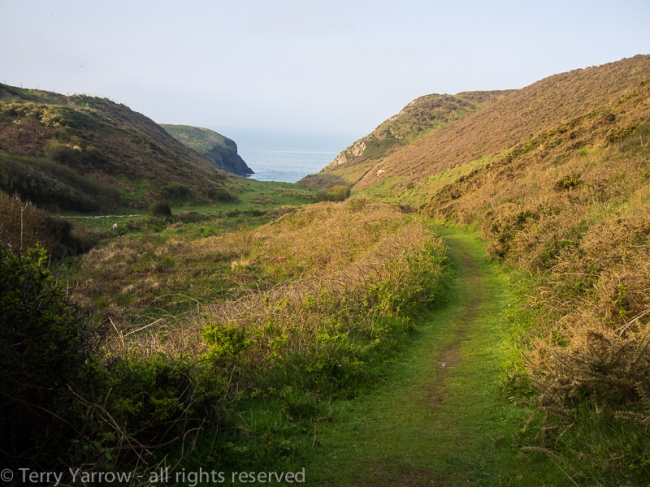 Walking down to Porth Rhaw in the early morning light

Climbing up onto the headland, I walked a lovely grassy path with beautiful views towards hazy headlands that would be my route later in the day. 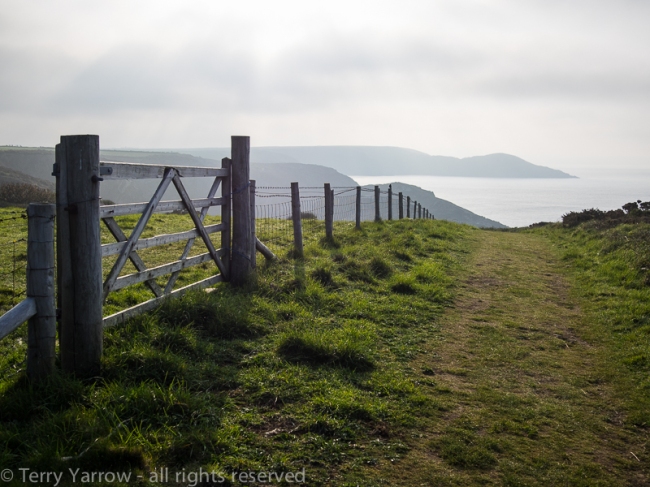 The coast near Solva

When I was preparing for this walk, my plan was to have a snack breakfast at my camp and to stop en route for something a bit more nourishing, and by that I mean a bacon sandwich :)!  It was a plan that hadn’t worked as up till now I hadn’t found many places to stop, such was the unspoilt nature of this coastline.  With Solva just round the corner, I hoped today would be different……..but it wasn’t.  I walked around the old harbour but passed nowhere to eat that was open, so I continued on my way.

From the next headland I could see the distinctive shape of Dinas Fach, a rocky promontory jutting out into the sea.  As I walked, I would see that peninsula from all angles.

The distinctive shape of Dinas Fach

Several headlands, and a great many steep ups and downs later, I had my first view of the amazing beach at Newgale.  The tide was out revealing acres of sand and lots of surf and surfers.  After the strenuous climbs of the last hour or two, I dropped down off the headland looking forward to a nice flat walk along the beach – it is nearly 2.5 miles long. 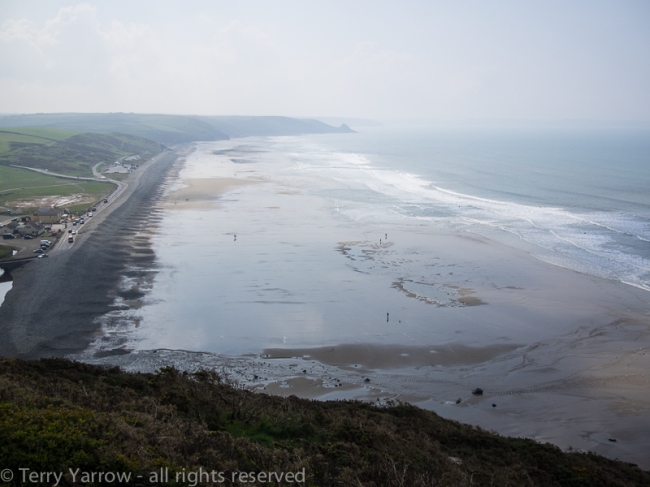 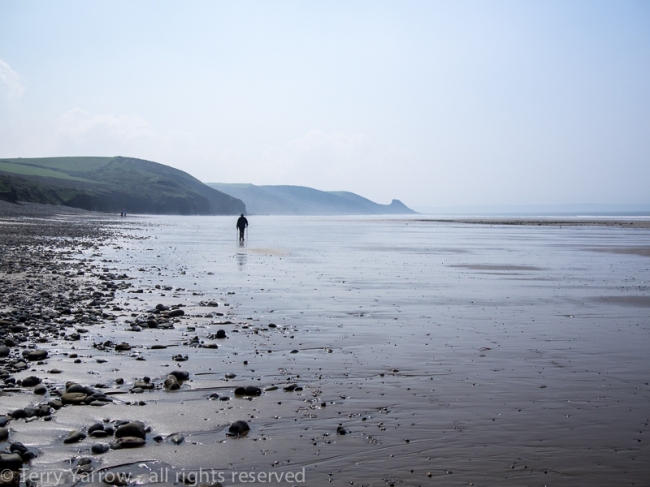 Newgale Beach and a flat walk

Naturally the flat walk had to come to an end and I once more climbed up onto the cliff top, dropping down to sea level again at Nolton Haven before climbing up yet again the other side.  I reached Druidston Haven, another delightful beach, and by surprise came across the Druidston Hotel.  This somewhat bohemian establishment was a place we had visited before on a family holiday but that I had forgotten about.  It made a good stopping point for a welcome drink and I sat at an outside table looking down over the bay.

The rock formations around this point were awesome, especially at Druidston and Haroldston Chins where there were deep clefts and caves.

I was nearing the end of my days walk now and I stopped to talk to a couple on the footpath near Broad Haven.  We compared notes on our experiences.  One of the benefits of Broad Haven is that there was a shop so I stocked up on food before walking on to the neighbouring village of Little Haven which in fact was much more picturesque that its larger cousin.  My stopping point for the night was on the headland a mile or so further on so I continued straight through to set up my tent and shower before returning to the village for a meal later in the evening.

I was sat in the pub eating a meal and charging my phone, pondering the day, when I noticed a lovely orange glow in the sky so I ran outside to grab a picture of what was a beautiful sunset.  It seemed a fitting end to another great day on the Pembrokeshire Coast Path and I made my way back to my tent in the fading light thinking about tomorrow when I would reach the half way point in my walk. 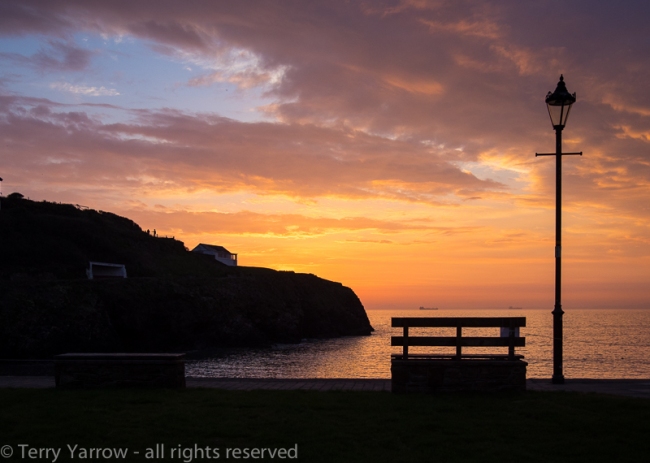 A beautiful end to the day at Little Haven