I had another great walk yesterday – well, that is to say, apart from the weather!!  Just a few days ago I was walking in a T shirt and getting sunburnt and yesterday I not only had a fleece on but I wished I’d taken gloves as it was really cold on the hills!  It’s no wonder we English are obsessed with the weather, its always a bit of a lottery what we are going to get!!  Nevertheless, it was a great 17 mile walk and it took in no less than three mills (well four really), although only one still works.

The walk started with a steady and long climb through woods and across farmland.  The woodland is currently being worked and there were loads of felled trees that the woodsman was cutting up – reminds me of a joke about three Irishmen who went for a job with a lumber company, who when told that there was only one vacancy replied, ‘Well your advert says tree fellers required’ :)!!  Farther along I passed an interesting project called ‘The Living Classroom’ which teaches all about the woodlands but outside rather than in the school.  I wished they had had that when I was young!  In the same area, I passed the UK Bike Park which is basically a mega mountain biking course running down through the woods.  Woodlands for teaching and recreation!

Coming out of the woodlands onto the open hilltop is amazing as there are fantastic views all around, and fortunately for me the sun chose that moment to show its face :)!  The hilltop here is the site of a beacon – one of a whole network of beacons that were used in ancient times to pass on bad news such as the arrival of the Spanish Armada, or good news of course, by lighting a fire at the top to signal to the next beacon where their fire would be lit and so on down the chain.  How times change – now we just pick up our iPhone – I wonder what Sir Frances Drake would have made of that!!

The first mill passed on this walk was Sturminster Newton Mill, dating from the 17th century although in fact there has been a mill on this site for 1,000 years.  Thanks to major restoration in the 19th century the mill still works today and it was in fact run commercially until just a few years ago when because of current health & safety and food hygiene regulations, commercial milling had to cease.  Interestingly, it was originally two mills, a fulling mill and a grist mill, with two separate mill wheels in the same pit.  The two mills were connected, albeit only at first floor level, and the mill wheels were replaced by a ‘modern’ turbine – well it was modern in 1904!  It is a credit to the engineers of the day that the mill still operates.

The second mill followed quickly after the first at Fiddleford.  Much smaller than the first mill, it nevertheless occupies a lovely position on the banks of the River Stour although these days it is silent!  It has much history and heritage, having apparently once been used a storage place for contraband liquor!  It was also said to be one of the favourite places of the poet William Barnes.  There is quite an unusual 16th century inscription carved into the outside walls – I think it basically means that the miller was a good guy and he welcomed those of like mind:

‘He thatt wyll have here any thynge don
Let him corn fryndly he shall be welcom
A frynd to the owner and enemy to no man
Pass all here frely to corn when they can
For the tale of trothe I do always professe
Miller be true disgrace not thy vest
falsehod appere the fault shal be thine
And of sharpe punishment think me not unkind
Therefore to be true it shall the behove
(To) please god chefly (that liveth) above.’

Another interesting thing on this walk was the smallest nature reserve in Dorset – it is in fact a Community Orchard with all sorts of fruit trees including apple, pear, plum and cherry.  With its restored dew pond (a bit dried up at the moment of course), it is a lovely place to sit and enjoy lunch – very quiet and peaceful.  The Chairman of the local Wildlife Trust visited while I was there and we got chatting – he calls regularly to check the trees (some are very old) and to see which are in blossom or fruiting.  They still have apple days in the autumn. 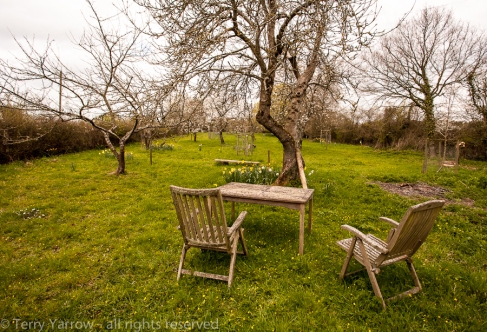 One of the things that saddens me on these walks, is how many churches I pass that have been converted to living accommodation.  I passed the church below which has served the local community for years and has a huge legacy of helping people and serving God, but is now redundant and I believe is a large house.  I know it is only a building but somehow it was a presence and a witness as well.

The weather on this walk was crazily mixed – from sunshine to heavy hail stones!  Which, I must say, often makes for better pictures :)!

The last mill of the day was probably the largest and was at Durweston.  I have been able to find out little about this apart from the fact that it has been modernised and converted into flats.  It still faces out onto the pond/river and I must say, it must be an idyllic place to live!  Durweston itself is a village famous for The Durweston Carols, a group of ‘gallery carols’ composed probably around 1800 and sung for many generations by the villagers – it is a village with a ‘musical heritage. 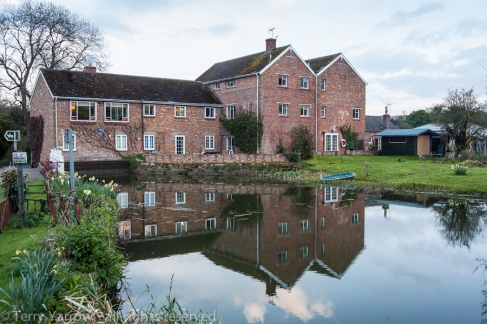 And the view it looks out onto is below.

The River Stour at Durweston

And for me, I guess looking out on that view across the River Stour as the last remaining light fades, is a great way to end another great walk!