The morning was bright and for once I decided to leave Dorset for the neighbouring county to do a 15 mile walk through some wonderful countryside and villages.  The day started in one of those beautiful meadows that are a dream to walk; the long grass swaying in the gentle breeze, the skylarks’ sweet song soaring above me, the butterflies fluttering by, the bees and bugs buzzing all around – just a dream!

Have you ever thought of a walk being tactile?  Walking through the meadow hearing, seeing, smelling (if I had a sense of smell), but feeling too as I walked with fingers outstretched combing through the heads of the long swaying grass.  It was a lovely feeling that added another dimension – a real multi-sensory meadow!

After a mile or two my route took me along a lane rife with tall, delicate cow parsley, always a delight in summer. 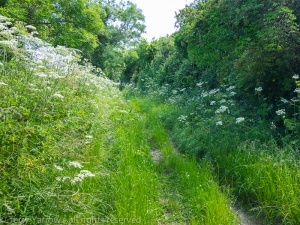 A lane lined with cow parsley

Pushing my way through the at times overgrown lane with grass and flowers brushing my legs, I was somewhat glad that the recent weather had been dry.  The lane eventually gave way to more open ground as I reached the edge of a field and passed an old, rustic fence post, its rough solidness contrasting with the flimsy grasses around it.  I ran my fingers over the post, feeling its roughness and wondering who else’s hands had done that same thing over the many years it had been there.  With hedging and missing gate, the post seemed surplus and yet still added something to a lovely rural scene.

Eventually I reached the first village, and a beautiful village it was.  I love walking the countryside but I also love walking these old villages with their old cottages, some picturesque and some functional, all part of a local community that has existed and seen many changes over the centuries.  Strange to think that cottages like the one below once housed poor farm workers but so often now are second homes for the wealthy.  How times have changed and what stories these cottages could tell.

Picturesque or functional, always a delight

Passing out of the village along a quiet country lane, I joined another footpath that skirted round a hill.  The heights reached on this walk are not mountainous but the views are none-the-less beautiful for that and I stopped to take in the landscape below me.

The hill itself was a real surprise!  Known as Windmill Hill, presumably because at one time there was a windmill there, the area was covered in beautiful blue flax, not the most common farm crop.  The breeze blowing across the hill rustled through the flowers creating a waving sea of blue. 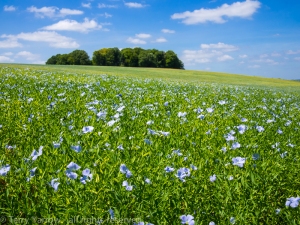 A waving sea of blue

There was more tactile to come but unfortunately not so positive – the path beyond the blue hill was overgrown with stinging nettles; shorts and nettles are not a good combination!  I picked my way carefully through and eventually reached clearer ground as the path skirted along the edge of some woodland with some lovely dappled sunlight filtering through.  It was like a fairyland and I tried to capture it with the camera. 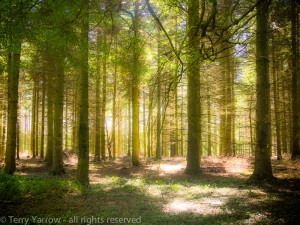 Another picturesque village, and a lunch stop, followed before I once again made my way out into the countryside.  The crops in the fields were already ripening and the paths through them were narrow and once again I walked with outstretched fingers feeling the touch of the full seed heads.  The golden grain swayed in the breeze as I walked.

And naturally a poppy or two joined in.

More fields followed with contrasting crops, the delicacy of oats to the touch and the robustness of barley.  The feel of these is so different, and the look too of course with the barley field seeming to impersonate the sea as wave after wave rolls across the field ahead of the breeze.  Narrow paths and high crops, I couldn’t resist running my outstretched fingers through the heads once again.

I stopped in the middle of the barley field, watching the ‘waves’ and listening to the rustling of swaying stalks.  It was a delight and made me think of W H Davies words, ‘What is life, if full of care, we have no time to stand and stare?’  We should, indeed, must take time to stand and stare, and to touch and feel too, to fully take in all that is around us.

But I needed to move on, as the day was ticking by, and leaving the field behind me, I joined a wonderfully picturesque path along a ridge top, again not a high ridge but with lovely views on each side.

Eventually I neared the end of my journey, but there was more to come.  For the last stretch, I joined a rampart and ditch that had once formed the fortification along the county boundary.  I sat for some time with the long meadow grass waving around me, drinking in the scene.  What history there is in these ramparts, what blood must have been shed on their flanks that are now covered with the most delightful wild flowers and butterflies – a beautiful place of peace after centuries of strife. 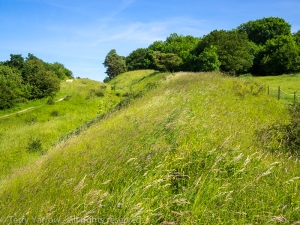 The final part of my walk was back through the meadows that I had started out from.  Still with skylarks serenading me overhead, and a myriad wild flowers to welcome me back, I took some time to capture the scene, and to try to capture the essence of the meadow which I love so much.  In reality, this is an impossible task since the meadow is a place that needs all of your senses to take in its joys and a camera can only do the visual.

The essence of a beautiful meadow

God gave us all our senses to enjoy but so often we neglect to use them, rushing through life hardly noticing what is around us.  The sense of touch is particularly not associated with walking as much as sight and sound but it can really add another dimension to a good walk – so next time you go out walking, make it a tactile walk.