The day I had been looking forward to arrived 🙂  I had packed and repacked my rucksack numerous times, several rucksacks in fact, and I ended up with a hard choice – one that was big enough to take all my gear for a four day trip but was old and uncomfortable or one that was not big enough but was easier on the shoulders!  I chose the latter!  It just meant that the tent, and ultimately several other things, had to be attached to the outside.

Walking along the seafront at Weymouth with its pristine, newly raked beach, I spied a beachside cafe advertising bacon baps so I sat down :)!  Not for long though, just long enough to eat breakfast and drink a cup of tea and by 8.30am I was off walking, really off walking this time.  The first part of this walk is quite novel really as it involves crossing the harbour entrance which is normally possible by rowing boat ferry, probably something of a rarity these days.  Unfortunately though, I was too early so had to detour some way inland to cross by the bridge and then walk back out on the other side.

Passing the 19th century Fort Nothe and then the much earlier Sandsfoot Castle, built by Henry VIII, both to protect the entrance to Portland Harbour, my route took me along the track bed of the old Portland Railway, some lovely flat, easy walking to start the day.  After an hour or so I reached Ferry Bridge and the start of the footpath that skirts round The Fleet. 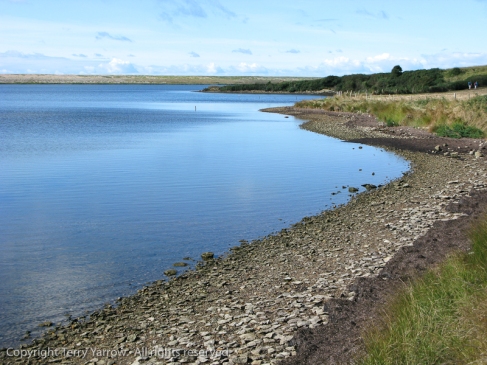 The shoreline of The Fleet

The Fleet is a well known tract of water between the mainland and the famous Chesil Beach, an 18 mile long barrier of shingle and pebbles.  The water trapped between the two forms The Fleet and is salt at one end, becoming more brackish towards the other.  Almost to echo this, the size of the pebbles on Chesil Beach also varies along its length from large at one end to much smaller at the other, caused by the action of the tide.

The footpath winds in and out of every bay and inlet and on this occasion even around the military rifle range that was operating, thus closing the shorter route.  It is a beautiful place to walk with myriad geese and wildlife, and later even more famously swans.  The noise from the geese was deafening!

Part way along, I passed what was once Fleet House, seat of the Mohun family immortalised by J Meade Faulkner in his book ‘Moonfleet’ (a book which I have always loved), now a hotel.  Nearby also are the remains of Fleet church which was all but destroyed in the huge storm of 1824 when a massive tidal wave broke over the top of Chesil Beach destroying much of the village.

As the footpath nears the famous Abbotsbury Swannery, it turns inland to cross farm land and climb up onto a ridge.  The views across The Fleet and also inland are beautiful and it is a walk to be savoured rather than rushed. 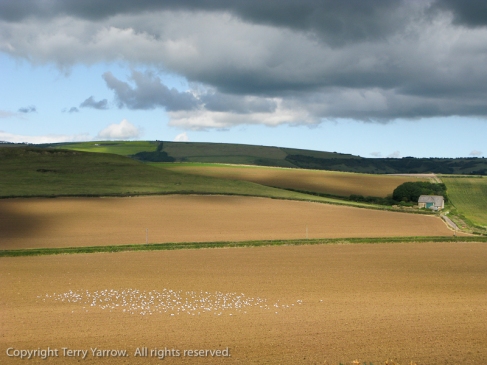 The rolling landscape of Dorset

After a few miles, the path took me down into Abbotsbury but before dropping into the village, I just had to stand and enjoy the wonderful view across to St Catherine’s Chapel, high on its hilltop.  This chapel was once part of Abbotsbury Abbey and was built by the monks as a place of pilgrimage and retreat.

Across to St Catherine’s Chapel

Amazingly in the 5 hours since leaving Weymouth I had walked 14 miles……and I was now hungry so I decided to stop off at the local pub for a sandwich :)!  Unfortunately there was no room in my rucksack even for food!  Abbotsbury is a beautiful and unspoilt village with honey coloured cottages and the lovely surrounding hills.  It is a popular place with its swannery, tropical gardens, chapel, abbey ruins, tithe barn and so on, and especially so in the spring when the cygnets hatch in the swannery.

All too soon I had to move on and climbed up onto the ridge that runs just inland of the coast path.  Part way up the side of the hill I turned for another view of the village nestling in the valley. 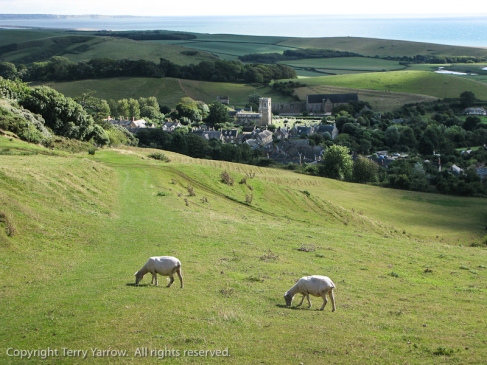 Abbotsbury in its valley with the coast beyond

It wasn’t the last I would see of the village as there are fabulous views all along this ridge and in the picture below, you can really get a feel for the way The Fleet has been created by the long barrier that is Chesil Beach or Chesil Bank as it is sometimes known.  Beyond those, you can see the Isle of Portland stretching out to sea.

The Fleet, Chesil Beach and Portland

Continuing along the ridge, the path crosses Wears Hill with its beacon marking the spot of a much earlier version last lit over 400 years ago.  This is one of a series of beacons all along the south coast.

The site is most noted for its amazing 360 degree view across the coast and inland.  When I got there, the cows were all sat down which is a worrying sight – well my grandmother used to say that it meant rain was coming!  It didn’t – not this day at least!!!

Yet another feature along this part of the walk is Abbotsbury Castle, an Iron-age hill fort.  Its double ramparts cover around 4 acres but the weather, and probably feet, have over the years caused some erosion.  When I passed through, the wind was whipping across the hilltop and I wondered how the people would have coped there in the winter. 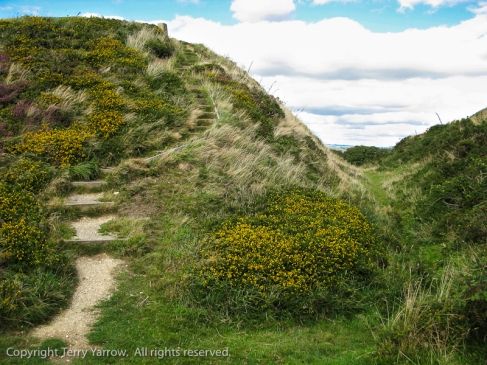 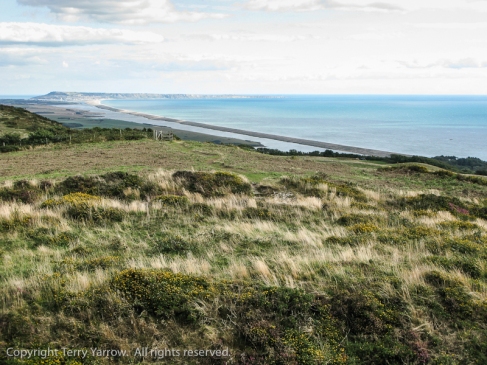 By now, I was reaching my destination and the first night’s stop near the village of Puncknowle (pronounced Punnel) which stood just inland from the ridge top.  I walked into the village at 4.30pm after walking nearly 19 miles.  The evening was bright and dry as I pitched my tent but I was slightly relieved that the village was on the leeward side of the ridge!  I was somewhat relieved too that my ankle that had been giving me problems recently was giving me nothing more than twinges at the moment :)!

I spent the evening exploring the village and then retired to the local pub for a welcome meal – the dog in the picture is not mine by the way.