Another fantastic day!  I left the B&B before 9.00 – well I was glad to be out of it to be honest……..having ‘filled up’ on my continental breakfast.  The B&B couldn’t run to a full English despite the £40 price tag!  The first thing I did was to go to the local outdoor shop as I thought I would treat my shoes to some new laces, but they were closed (unlike my shoes) – so I had a wander round the Cobb and harbour taking pictures instead.  It was a lovely morning, but very windy – I nearly lost my hat several times, and my head!

I picked up the coast path at around 10.00 and the first few miles were great as I walked through a nature reserve created out of the cliff falls.  The birds were singing and I was sheltered from the sun so the walking was good.  I think the best part of this coast walk is the variety – ridge tops, beaches, headlands, cliffs, woodlands, just about every type of habitat you could think of, and on this particular stretch, even some abandon buildings that have become ruins over the years.

It’s strange but I passed a lot of people on this stretch.  Each time I had to step up my pace to convey the impression that I was a fit, rugged, Bear Grylls type when inwardly I was just waiting to get out of sight behind a tree so that I could collapse back to my normal pace ;)!  The trouble was that I would then meet someone else and have to go through the whole process again ;)!

I was thinking as I walked that I hadn’t met any serious walkers so far, just lightweight strollers whose car would be parked somewhere nearby.  You can usually tell them by the size of their backpack and the way they walk…….and the fact that they have car keys in their hands ;)! But on this section, I met two serious walkers, and they put me to shame!  One who I got talking to said he had walked from Boscastle and had covered 400 miles in 22 days.  I can’t remember where the other one had started but it was a similar story.  It made my 4 day walk seem a bit tame!  But then, they were both younger than me and they had lighter packs too.  I’ve obviously got a few things in mine that they haven’t – must check my packing list but I’m sure I didn’t put in the kitchen sink!

A great place for a fried egg sandwich :)!  Beer beach.

After 7 or 8 miles I dropped down into Seaton, and quickly passed on through!  I hit Beer at 9 miles – the place not the drink – and I had a great fried egg sandwich and a cup of tea on the beach :)!  I passed a B&B there with sea views and outside was a sign saying ‘vacancies’ but 3.00 seemed a bit early to be bedding down for the night so I walked on.  And I’m glad I did as there was more great walking to come.

The walk from Beer to Sidmouth was great!  It was quite cloudy and there was a strong wind but it was mostly on my back.  It was mainly along flat, high cliff tops but unfortunately it was punctured every now and then by a number of river mouths.  Each time I hit one it meant dropping down to sea level and then climbing all the way back up the other side. 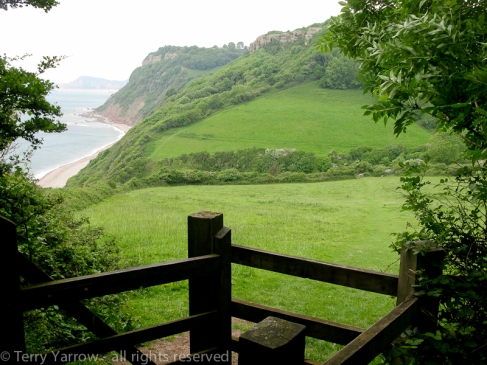 What goes down must come up

Some kind soul had even written the number of steps on the stiles before and after these big dips!  Very helpful and encouraging!!!  It’s funny but as the day goes on, I’ll swear the climbs get steeper ;)!

As always, the last climbs are the toughest, especially when they are not expected!  Going up that last climb, I had to go through several fields of cows, all annoyingly gathered around the stiles that I had to cross.  But I walked on through them – they can’t frighten me any more!  By this time my little toe was complaining, as was my left knee, although that seemed to come and go – the pain that is, not my knee!  It’s strange but there have been times when I have felt really tired even to the point where I have considered stopping early.  But then by keeping going, I seemed to push through the bad patch and regain some energy from somewhere.  Well, with this fabulous scenery, who wouldn’t.  Anyway, after nearly 20 miles I was relieved to see Sidmouth come into view and I headed down off the headland after that last climb.

Sidmouth appears out of the mist – just one more climb!

Mind you, it wasn’t over yet as I had to spend an hour wandering round the town looking for a B&B.  I thought for a while that I was going to have to sleep rough on the beach but eventually I found one, which was a relief as I really needed a shower and a cup of tea :)!  And not only did I get my shower and cuppa but I got a turkey sandwich, fruit cake and a beer too, thanks to some lovely B&B owners who went way beyond the call of duty and took pity on me.  And I was able to watch the football as I ate :)!  It was a great end to a great day! 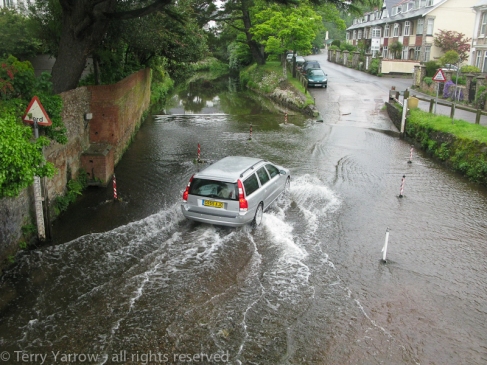 Today I woke up to a wet, dreary morning…….so I had an extra half hour in bed!  After a good cooked breakfast I left the guesthouse and wandered along a damp sea front, although by now the rain had stopped.

A wet sea front at Sidmouth

Alone on the beach

The day started with an immediate climb from the end of the promenade over Peak Hill.  It started on the road, and then onto a disused road, parts of which were practically going over the edge of the cliff, and then on through the woods, upwards into a damp sea mist! 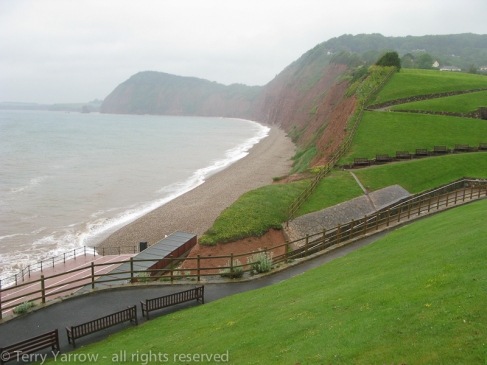 It’s funny but I hadn’t been looking forward to this as the headland looked daunting from sea level but I was pleasantly surprised as I went over the top much quicker than I had expected.  I was looking for yet more climbing, not realising that I was in fact already at the top.  From here, there was just downhill, lower level walking, which was just as well because you couldn’t see much from the high headlands! 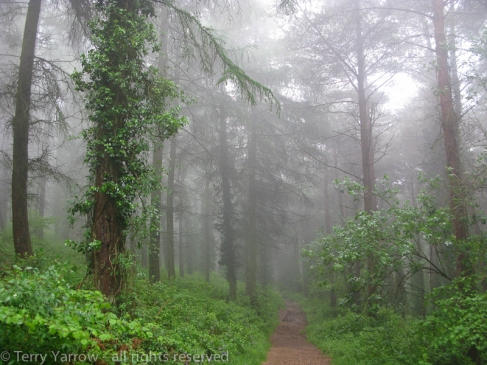 Up into the misty forest

I headed down towards Ladram Bay, which basically comprises a massive caravan site which rather spoils what is a lovely bay with many red sandstone stacks just off shore.  Two things spoiled this part of the walk – one was having to walk through the caravan site which went right up to the cliff edge, and the other was the stiles!  I had a real struggle to squeeze me and my rucksack through some of the gates – clearly Devon is a bit meaner on space than Dorset for some reason ;)! 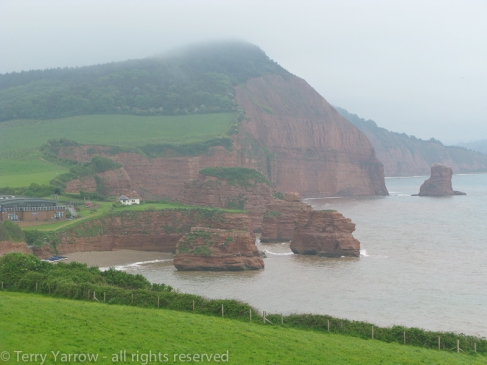 Looking back at Ladram Bay

From here, it was quite a flat, easy walk into Budleigh Salterton which was just as well as my left little toe and my left knee were complaining quite loudly – in fact I was limping a little by now!  On a positive note, the weather was brightening up quite nicely by now and it was becoming quite warm out of the breeze – in fact, the last part of the walk was a breeze :)!  I even took a self portrait by balancing the camera on a post – well, why not :)! 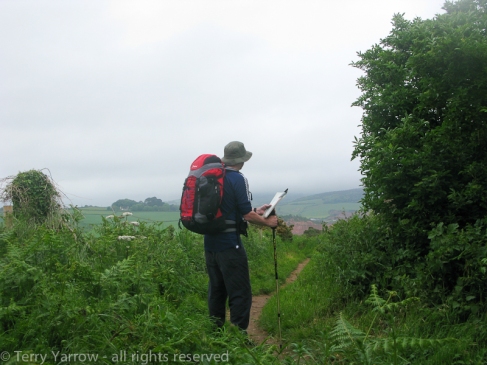 TDR on the trail 🙂

I was in sight of Budleigh Salterton much earlier than I had expected.  I stood within touching distance of the town……and yet, still had another mile or two to walk!  This was because there was an estuary separating me from it and I had to walk inland to reach the crossing point before walking back out to the coast on the other side – a one and a half mile walk to gain just 20 yards!

My walk finished on the sea front where my pack suddenly became four stone heavier – I picked up four stones from the beach, a memento of four fantastic days of walking!

Budleigh Salterton seemed a fitting place to end my walk as my ancestors came from here.  Although I am 100% Dorset born and bred, I guess there must be a little bit of Devon blood in there somewhere.