Betwixt and between seems to summarise where we are at the moment and this was a betwixt and between walk!  In terms of flora and fauna, summer has not quite gone and yet autumn is here; in terms of weather, autumn is definitely here!  On this walk there was evidence of both seasons and there is such beauty in both and so much to be enjoyed if we just walk with our eyes open.

The walk started off by crossing some classic old Dorset countryside……although there is precious little of it left now – I mean that mix of conifer plantations and open heathland that was made famous by one of Dorset’s great authors, Thomas Hardy.  At one time, much of Dorset was covered with open heathland but gradually over the years it has either been built on or reclaimed for farming, making it a rare commodity in the 21st century.  Fortunately some pockets remain dotted around the county and this walk took in several.

Having crossed the high heathland in the midst of changing from its summer dress to its winter garb, my route dropped down into woodlands with ferns in a similar state of change.  These look delightful as they gently unfurl in the spring but are equally delightful as they change into autumn colours on the ‘forest’s ferny floor’ as Walter De La Mare describes it. 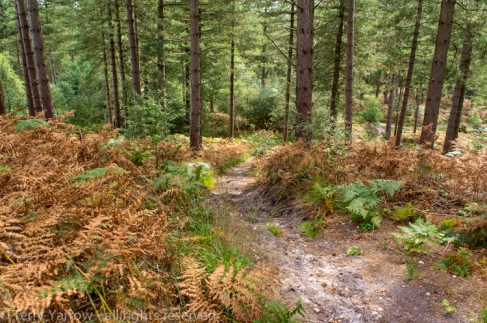 It was at this juncture that I rescued a spider!!  Well to be exact, I avoided destroying him and his web!  I was walking along the forest track just listening to the birds singing their myriad different songs – its strange really, who told the wren that he had to sing that particular tune, or the yellow hammer his particular tune?  The wonders of this wonderful creation!

Anyway, as I walked, I noticed something glistening immediately in front of me so I stopped for a closer look.  It was a single slender strand of web that stretched a full 10 feet from one side of the path to the other and that supported the web with the spider in the middle waiting for his prey to fly by (it conjures in my mind pictures of me walking into the web and being bound up by the spider like something out of a horror movie 😉 )!  Well, I didn’t want to destroy his handiwork and it was at the wrong height for me to get over or under it so I detoured around it by fighting my way through the brambles and undergrowth to the other side, not an easy task! 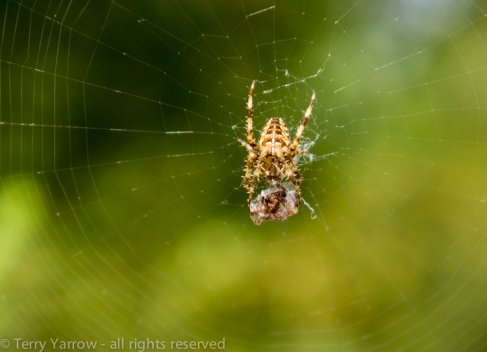 A very grateful spider with his lunch!

A little farther along the trail, I came across some evidence of summer, just to contrast with the autumn heathland that I had just walked through.  This was a hover fly on a corn marigold.  It was almost as if summer was saying, ‘I haven’t quite gone yet!’

Hover fly on a corn marigold

For a time I left the heathland behind (although I would return to it later) as my route took me to the resting place of one of Dorset’s heroes.  To get there, I had to cross the river, and a beautiful river crossing it was too with its hugely long and thin bridge alongside what was a ford.  In fact whilst I was there, a group of cyclists thought it still was ‘fordable’ as they all rode into the river for a short distance before each in turn got stuck as their wheels sank into the shingle……and they fell off!

The goal was St Nicholas’ Church Moreton, famous for being the resting place of T E Lawrence, Lawrence of Arabia.  It is a beautiful church with some spectacular windows, each engraved with lovely scenes.  The original church was badly damaged in the Second World War when it was hit by a German bomber and instead of repairing the windows, it was decided to commission Lawrence Whistler to create new ones.  They are beautiful and world famous! 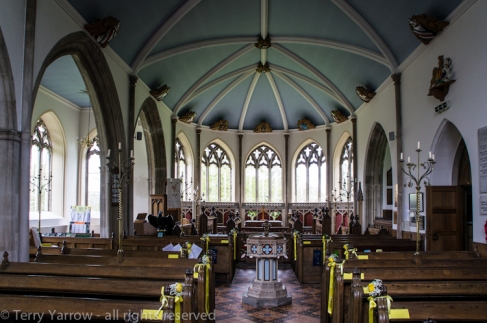 Lawrence’s grave itself sits in a small detached part of the graveyard. 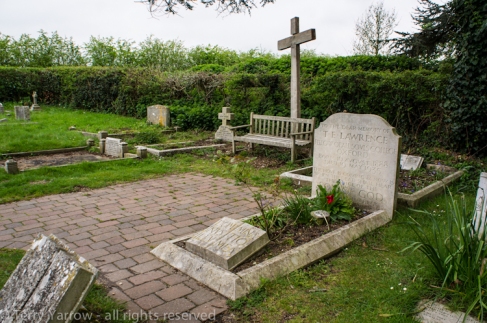 For the time being, I left T E Lawrence but there would be more reminders of his life further on in my walk.  My route took me back across the long bridge and through another pocket of heathland.  This one was covered partly with wonderfully picturesque long, yellowing grass.  I love this grass and I sat and ate my lunch in the middle of it, just listening to the gentle sounds of the Dorset countryside.  It was a delightful place. 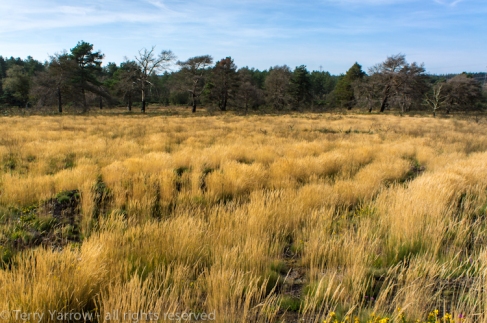 And here too was a reminder (or is that a remainder!) of summer, with a plethora of butterflies all around me. 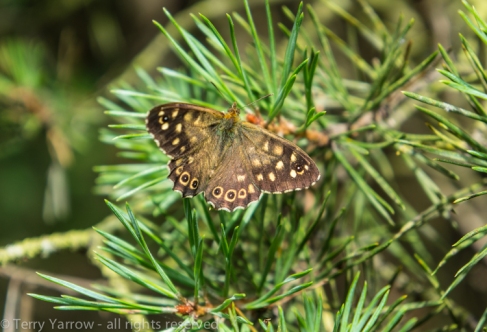 All too soon it was time to leave my idyllic surroundings and continue on my way to an altogether different area in more ways than one.  My route took me out of the heath and onto a country lane, but not just any country lane, this was the very place that T E Lawrence met his untimely death on 19th May 1935 at the age of 46.  Having achieved and survived so much during the Arab campaign, Lawrence finally succumbed on this stretch of Dorset road when he lost control of his motorbike whilst trying to avoid two boys who were cycling in a hidden dip.  It seemed fitting that as I walked this stretch of road, an army tank passed by. 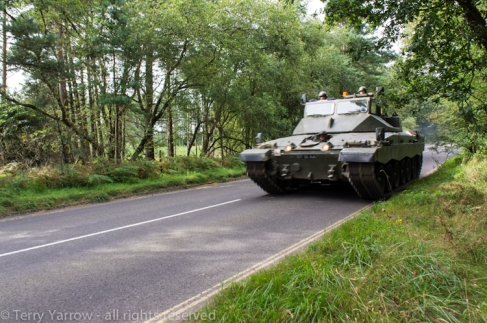 The spot where Lawrence died

Of course Lawrence was an author, famous for The Seven Pillars of Wisdom, but that wasn’t his only legacy.  As a result of his accident, crash helmets were ultimately introduced for all motorcyclists.  Just a short distance away along the same road sits Clouds Hill, Lawrence’s cottage home for many years, now in the hands of that National Trust. 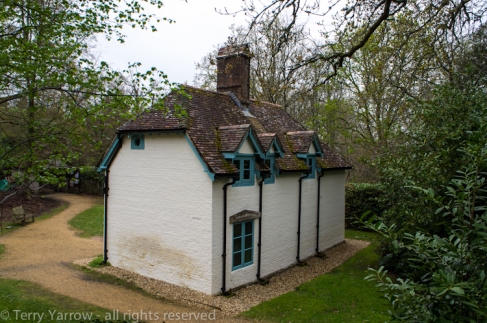 Leaving T E Lawrence behind, I continued my walk, and crossed yet another pocket of heathland.  Here again there was a mix of summer and winter with the delightful Bell Heather still bearing its summer magenta-purple plumage whilst the equally delightful Bog Asphodel had changed from yellow to a wonderful autumn orangey red.

Colours of the heathland – Bell Heather and Bog Asphodel

I was nearing the end of my walk now but there were two quintessentially Dorset villages to pass through, picture postcard perfect villages!  Apart from the usual array of delightful thatched cottages, the first village had a rather interesting village post office :)!  Sitting beside the old village hall, the shop was in what was at one time a granary with its arched foundations designed to keep unwanted visitors out!  This was a wonderful village to walk through although I suspect that there may be less residents there now with some of the cottages having been turned into second homes.  It is a shame that the soul has gone out of a lot of our lovely villages as local people are priced out by the ever increasing prices of these cottages! 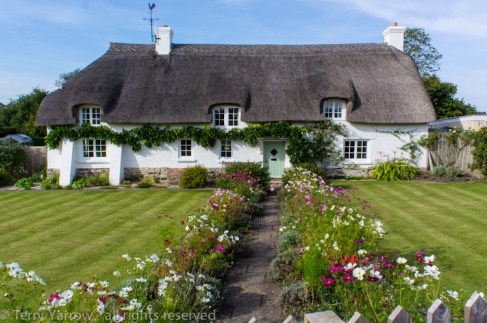 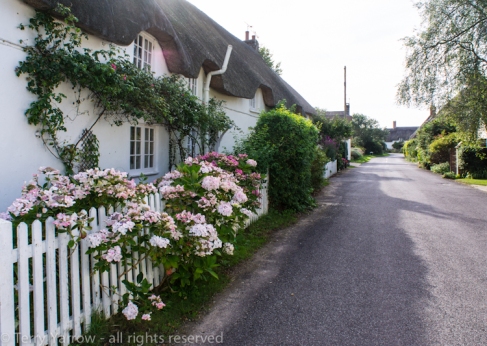 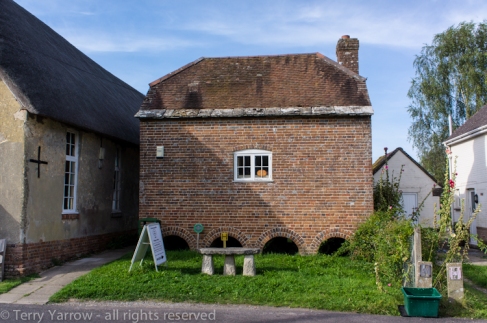 My final stopping point was another village of picture book cottages and the nice thing about this one was that although there is recent development, it has all been designed to blend in with the old.  It does give you some faith in the authorities that control the planning requirements and a greater hope that our wonderful heritage will never be lost :)!

I started of by saying that we are betwixt and between and this wonderful walk contained much to prove that.  It highlighted the beauty of both summer and autumn – in fact every season has its beauty and this is never more true than in this county and country of ours.  With the changing seasons and weather, we never have a chance to tire of anything and I think that is a real positive………..unless it is rain, and I think we have had our fair share of that ;)!!!!!