Well it’s a grey day outside as I look out of my office window – definitely a day for blog writing, and a walk I did a couple of weeks ago.  It was a walk that took me past a number of lovely Dorset churches but the first one as I trod my way through the first village was one that I couldn’t visit.  There had been a fire in the church earlier in the year and damage was caused to the roof rendering it unsafe.  The good news is that it should be re-opening soon.

So having left the village, my route took me alongside the little stream that runs through the valley and past some historic machinery, relics and reminders of bygone days.   These were the remains of sluice gates above the tunnel in the picture below.  This was part of the 200 year old irrigation system that was used to flood the meadows, raising the temperature of the land early in the year to ensure a richer crop.  Even without the flooding, the land around this area is still a relic in itself as it always seems muddy whenever I walk it! 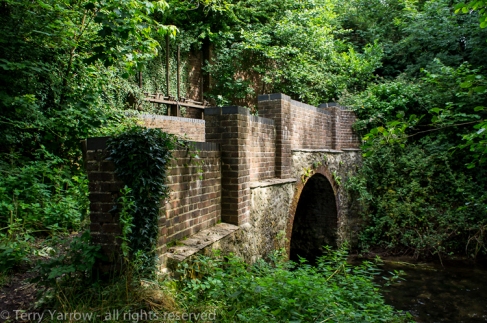 The tunnel and the old irrigation system

The water meadows are delightful, with many wild flowers, bugs and bees around and it is lovely to walk with the chattering of the stream beside you, almost as if it was trying to talk to me about ‘the old days’.  But all too soon, I had to leave its company and strike out further ‘inland’ to reach one of those lovely little hamlets with its own church.  A picturesque and peaceful place and a church with an added bonus – there was a stall inside selling cakes, jams and chutneys to raise funds for the church.  Well, naturally I had to support it even if it did mean carrying it around all day!  I like these stalls though, they are part of Dorset life, and you often find some unusual chutneys on them :)!

A beautiful church with a chutney stall at the back

A picturesque cottage in the hamlet

Having left the hamlet (and returned 10 minutes later because I had left my hat in the church!), I continued along one of those very old ‘roads’ that always intrigue me.  I wondered who had gone that way before me in years gone by – was it a drove trail to the local market, was it just a link between villages or farms?  There are many of these routes in Dorset, probably busy byways in the days before cars but that have never been converted to modern roads.  I’m glad of course because they make me think about what life might have been like in those days, and they make great walking routes too with lovely hedgerows on either side.

A few miles further on, I passed a beautiful old manor house and another puzzle – what was it now?  I was to find out more a little further on in my walk :)!

A lovely manor house and a grand entrance – but what is it now?

It was actually in the nearby village that I found out more, a village that goes by the delightful name of Frome St Quintin.  This village has a beautiful remote church that I have blogged before and I found out more about that too :)!  The church, in the picture below, has a rather strange tower which looks like some afterthought; that is because it was – the somewhat squat tower was added after the main church was built but what makes it so incongruous is the fact that the tower is rendered.  The rendering is a much more recent addition, necessitated by severe damp problems.

What makes this such a lovely place is that the church is surrounded by fields and has no road access – tradition has it that there was originally a settlement immediately surrounding the church but that it was decimated by the Black Death, leaving the church isolated.  The church was restored in 1881 so many of its features are late victorian, such as the beautiful carving on the altar pictured below.

The isolated church and beautiful carving of the last supper

While I was there, I met a lady from the village and we fell into conversation – it was she who told me some of the history of the church and also of the old manor house.  So what of that magnificent old house?  Well the original house built in 1212 was owned by monks from Milton Abbey and it was rebuilt as this amazing mansion in 1612, passing into the private ownership of Sir John Strode.  It was said to be haunted by a ghost who on the same day each year would chant, ‘Search for Wat Perkins’ – many years later the skeleton of a murdered Scottish peddler was found in a ditch nearby and the ghost was reportedly never seen again!

In 1951 the Home Office acquired the house for use as a police training centre.  At that time a lot of ‘modern’ buildings were added such as accommodation blocks etc.  Being surplus to requirements, it was sold into private ownership again and has been used as a Christian retreat centre aimed at the American market, and for weddings etc.  The house has been described as the best in Dorset and it would be great to see it restored to its former glory – but somehow I suspect that is unlikely!

This was a walk of extreme contrasts in many ways!  As I climbed up to the ridge above the village I could hear the sound of many engines…..clearly the nearby Go-cart racing track was in use.  I stopped for a quick look at these tiny machines racing round the track at breakneck speed with just the sound of the high pitched engines speaking of tension.  Passing swiftly on down the other side of the ridge, their noise faded and I was able to walk in complete peace again.  And in this valley, I experienced a very special moment!

There were sheep on the hillside and one particular sheep was all on its own, laying on the ground.  I thought it looked unwell but it was also very big so I guessed it was heavily pregnant.  What I hadn’t realised was that it wasn’t only pregnant, it was giving birth at that very moment!  After a while as I stood and watched, she stood up and I saw the amazing sight of the head of a little lamb poking out as if it was just looking around surveying the scene to decide whether it wanted to come out!  With a head at each end, it looked like something out of Doctor Doolittle ;)!

It wasn’t long before the rest of the tiny lamb appeared and the mother then very lovingly licked it to clean it up whilst the little chap bleated at her – it was clearly a moment of mother/son (or daughter) bonding and it was very special to see.  With no midwife, no vet, no farmer, not even other sheep around, the ewe gave birth to a bonny baby.  Isn’t creation wonderful!  I felt very much like an intruder, as if I shouldn’t be there, so I kept my distance rather than get too close.  I did take a couple of pictures but the quality is not great because I have had to enlarge them quite a lot.

After some time, I continued my journey and as I got to the bottom of the field there were more young lambs seemingly waiting for their new playmate.  It seemed strange – new lambs in August.  It once heralded the coming of spring!

Waiting for the new playmate

Strangely, in the opposite field there were some really attractive cows with rather ‘wonky’ horns.  It seems strange to talk of a cow as being attractive, but I think these really were. 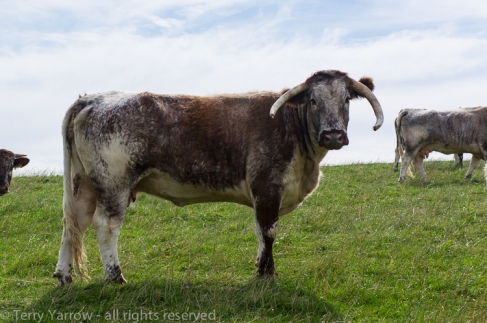 I continued down the valley to the ever present sound of the buzzards and eventually came into another picture postcard village.  I have been to this village before and to the church but this time, I noticed something I hadn’t seen before.  It was a fireplace actually in the porch beside the entrance door – this is something I have never seen anywhere else.  Apparently, before the village hall was built, the porch was used for some village meetings, hence the fireplace!

The village church and its porch fireplace

The afternoon was drawing on and I still had a few miles to walk, so I moved on.  I climbed up out of the village through the trees and the beautiful light of the golden hour beamed down between the foliage creating an ethereal atmosphere that took my breath away.  I tried to capture the moment but the camera is a poor substitute for being there. 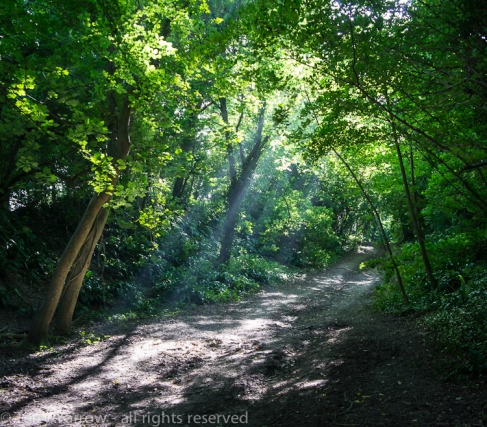 And as I reached the top of the ridge again I stole a last look down into the valley and the picture postcard perfect village in the distance.

A delightful last look into the valley

My last couple of miles were down into the neighbouring valley and to the village I had started out from early that morning.  This too was a delightful village but in many ways contrasting with the village in the other valley.  A villager summed it up well when I stopped and chatted as I walked back to the car, this was a ‘working village’.  But to me, it was none the less beautiful for that! 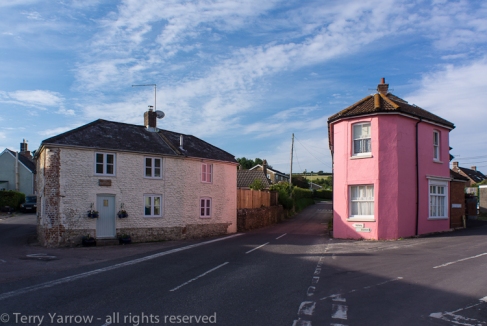 What a great walk this had been!  Great weather, some interesting conversations, new birth witnessed, delightful villages and churches, and a jar of chutney :)!  What more could a man want!

The pictures on this blog are all the copyright of The Dorset Rambler and must not be used without permission.