Well summer came at last to this ‘green and pleasant land’…….well for a time at least!  And as is always the case with these changeable times and changeable weather, you have to make the most of it – and make the most of it I have!  So much so, that there has been little time to sit in my office and write.  In fact, over the last two weeks I have completed 7 full day walks (work gets in the way on other days), a total of around 100 miles on foot.  And it has been great :)!

But today is drab outside my window so I can happily sit in my dry office and at least commit one walk to my blog.  It is a walk I did a couple of weeks ago just as the wet weather was changing to sunnier climes for us.  It was a varied walk in every sense of the word as you will see!

It started in a surprising way!  Having parked up, I got out of my car and was just putting my walking shoes on when the church clock started to chime the hour.  I thought nothing about it until something vaguely registered in my head……the church bells were playing a tune!  In fact it was the National Anthem – very strange to hear it played on church bells.  I thought maybe the bell ringers were practicing but it seemed unlikely.  I thought maybe it was something to do with Queen Elizabeth’s Diamond Jubilee, but I was wrong on that too.  I stopped a passing villager who told me that it happened every three hours and that it had done so since the jubilee of Queen Victoria.  Very unusual, and a lovely start to the day.  I determined that I would be back in time for the evening ringing so that I could record it!

‘God save our gracious queen’ say the bells of St Andrews

One of the things I love about walking is the fact that people are usually so friendly wherever I go – the same can’t always be said about the animals I meet but more of that later.  Maybe it is because I am of the ‘older generation’, but most will say a cheery ‘hello’ and some will stop to chat for a few minutes or often longer.  As I walked through this village and out into the countryside, three groups of villagers stopped to pass the time of day with me.  Clearly this is a village where the natives are friendly :)!

Once out into the countryside I had company of a different sort with buzzards hunting overhead, making their distinctive pee-yaah sound as they soared.  Later they were accompanied by the ever graceful swallows wheeling around catching insects.  There were wrens too – I just love wrens!  They are so diminutive and yet they have such a clear, crisp and loud song, so easily recognisable.

It wasn’t long before I reached another beautiful village with its own church standing proud in the centre. The first view I had of this was as I passed the end of the tiny lane that led off the road.  With cottages on either side and lined with flowers, this was a delightful way to get to the church yard.  As always, this was a place of peace and a place with some amazing stained glass too!  Every window tells a story and none better than the one below.

The way to the church 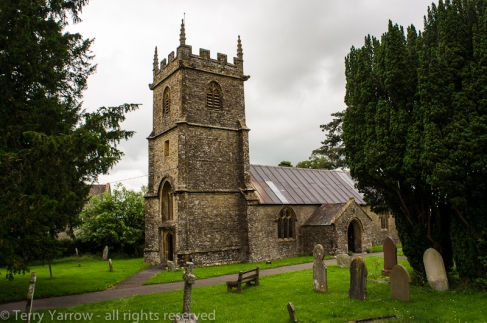 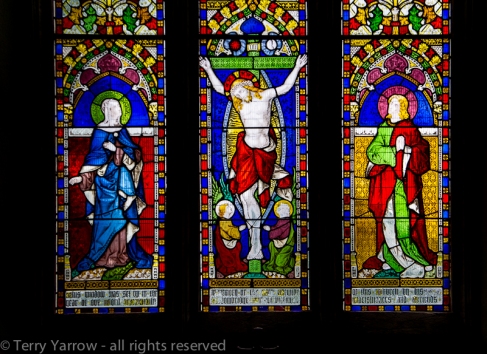 The village church with its stained glass

As you can see from the photographs, the day that had started so promisingly had now clouded over, and worse was to come!  Underfoot, the ground was difficult and crossing every field was like walking across a lake as there was so much surface water around after all the rain of recent months.  Despite the waterproof walking shoes, my feet were wet!  But hey, we are used to that!  Also, it was rather like an obstacle course as every stile was swamped by overgrown shrubbery – wet shrubbery!  I wondered why everything was so overgrown and I came to the conclusion that there are two reasons – one is the rain, and the other is the rain!  Well not quite.  The first ‘rain’ simply makes everything grow more; the second ‘rain’ keeps everyone indoors meaning that the paths haven’t been walked so much (and that after all is what keeps the paths clear usually) – well apart from The Dorset Rambler who of course is crazy enough to walk in all weathers!

Just as I left the village, I came across the remains of the ancient pound.  These were a common sight in days gone by when animals were grazed on the common lands.  If they strayed into areas where they weren’t meant to be, causing damage, they were impounded and only released to their owners on payment of a fine.

Nearby, there is one of those typical village farmhouses, perhaps predictably called……Pound Farm! 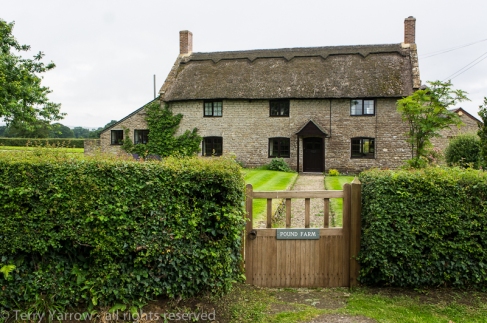 So it was out into the countryside again, for a time along a very quiet country lane.  Now although I usually keep away from roads, I have to say that I really enjoy walking along these quiet lanes.  Because the walking is so easy, it means that I can focus on what is around me rather than where I am walking – especially on this walk!  The hedgerows and verges on either side of the road were beautiful with all manner of wildlife, including the cabbage white butterfly that I posted about last time, and lots of Meadowsweet.

It wasn’t too long before I turned off the road and crossed another of those beautiful meadows.  Not so many flowers in this one but the grasses were gorgeous.  I am always amazed at the infinite variety of different grasses there are, and how beautiful they are when you take the time to look at them. 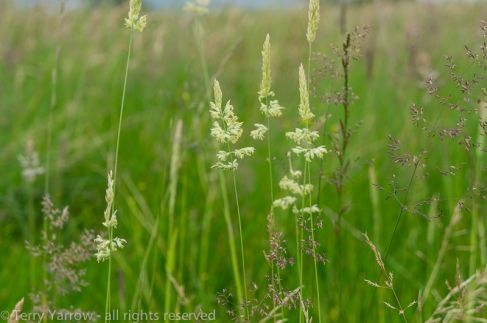 Along this section of the walk, I passed a number of remote cottages and I confess to a tiny bit of envy – they get all this beauty straight from their own doorstep.  Still, I guess there is beauty visible from every doorstep if you look at it the right way. 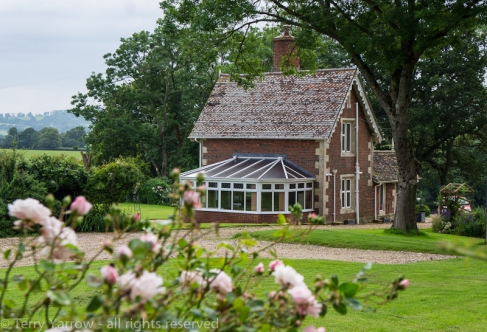 Having walked across ‘lakes’ and scrambled through overgrown stiles, my way was about to get worse!  My route took me down one of those very old sunken lanes that I have referred to before in my blog.  They always intrigue me and I often wonder what they were originally ‘built’ for.  Was it to drive the livestock to the local market?  Was it for farm workers to walk to work along?  Did people use them to get to church on a sunday morning?  Were they for the various landed gentry to drive their horse and carriage along as they visited their various properties?  I guess they had various purposes and it is a shame that so many of them are being lost to the undergrowth because there is no budget to maintain them.  This one started off beautifully as it was a clearly delineated lane with clear banks on either side and fairly easy to walk down.  However, it soon deteriorated and I found myself hacking my way through brambles and nettles that were above my head.  I could have found an alternative route but TDR is not to be beaten!

And win through I did, to come out onto clearer ground.  As I walked across the meadows and crossed the railway line that marked the final phase of the walk, the rain started to fall….and the track started to get muddier!  The long meadow grass is beautiful, and the trees and shrubs are beautiful, but not so much when they are wet and when all they want to do is transfer their wetness to me ;)!  They did that in abundance! 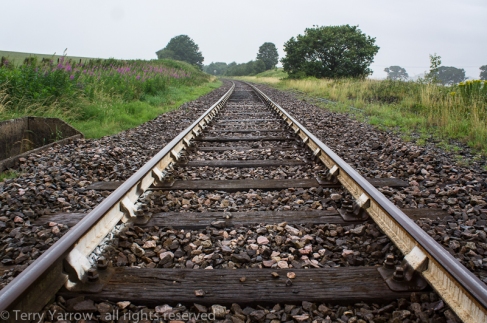 There were still two more hamlets and two more churches to pass before the end of the walk.  The first had the distinction of having an upside down font.  If you look carefully at the picture below, you will see that the animals carved on the font have their legs in the air.  In fact it is almost certain that the font was originally the base of an anglo-saxon cross which at some point was turned over and hollowed out to form the font of the current church.  The church sits next to the 17th century manor house as is often the case. 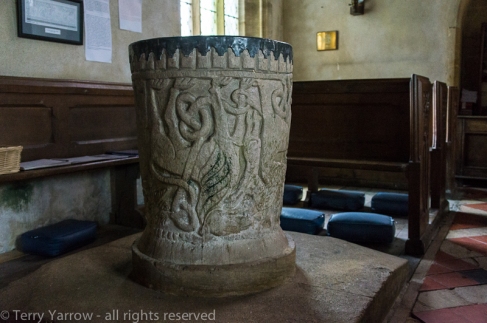 The church with its upside down font!

At this point, things were getting difficult.  I was walking in an area which was new to me and there using an OS map……which was getting increasingly wet and unreadable!  Ah, the challenges of walking in England!  Well no rain had been forecasted that day!  Anyway, I continued on instinct more than anything else and very soon came across the final church, the smallest church in Dorset and apparently the second smallest in England.  It was right next to a farmhouse and to get to it I had to cross the loveliest small hump back footbridge – and in doing so felt as if I was walking into someones private garden.  The church is now redundant and maintained by The Historic Churches Preservation Trust who do a great work in maintaining these very old buildings that are so much a part of the heritage of this country.  Their motto is ‘Creative spaces, sacred places’.

The way to the church

The smallest church in Dorset

Inside, apart from being dry :), the church was light, airy and had a lovely sense of peace about it.  As always, I wondered at the amazing legacy that it has and the thousands of lives that have been impacted by its witness.  It was time to move on so I headed back out into the even heavier rain to cross a number of boggy arable fields….although these were nothing to what was to come!  Amazingly, there were still lots of butterflies accompanying me despite the wet conditions.  It surprised and delighted me that these flimsy creatures still seem to be able to fly even though they were wet.  And they still looked happy – well have you ever seen a depressed butterfly?? 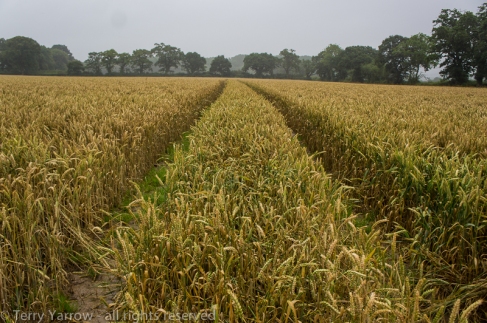 The final stretch was probably the worst because it crossed a dairy farm, and where there is cattle, there is MUD!  And boy was there MUD, literally knee deep in places.  It made the going very hard.  And on top of that I had to cross a field with a bull who eyed me up as I walked, but did no more than that.  Well they are usually fairly docile. The next field was full of young bullocks, and they didn’t give me such an easy time – they chased me and charged at me incessantly as I crossed their field!  They are harmless too, just nosy and with a bit of an attitude ;)!

“You are probably wondering why I’ve called you here. I’ve had complaints from walkers that you have been charging at them and chasing them.  You know your mothers wouldn’t allow that!  And besides, it’s making a terrible mess, just look at this place!  Now go and clean it up!” 😉

Finally I got back to the car and the relative dryness – I was somewhat wet!!  I had walked through waterlogged fields, scrambled across overgrown stiles, been stung and torn by brambles, hacked my way through impassable undergrowth, fallen numerous times, got soaked, glared at by a bull, chased and charged by bullocks……what a fabulous day!  I was happy!

Oh, and the church bells?  I was too late and missed them!

Your friend
The Dorset Rambler

The photographs on this blog are all copyright of The Dorset Rambler and must not be used in any way without permission.