I had a great walk yesterday, and saw areas that were new to me!  That’s one of the things I love about walking – no matter how much you do it, there are always new areas to explore and new sights to see.  And in different light, different weather, different times of year, different times of day, even the familiar can look different and new.  I never tire of Dorset and its wonderful countryside!

Yesterday’s walk was in west Dorset and started with the familiar, but from a different angle.  This was Colmer’s Hill, a much photographed landmark with its tiny clump of trees on the top.  The hill was named after the Reverend John Colmer who was once Rector at Symondsbury and the trees were apparently planted around the time of the First World War.  Someone once asked me how you get to the top, but in reality, I don’t think you can because there appear to be no public footpaths that go there.  It is one of those places that you always view, and photograph or paint, from another vantage point.  And what a great subject it makes too!

I had trouble with the footpaths on this walk!  There was one particular half mile stretch that I needed to find and it just wasn’t there, or in reality, it was there but was impassable!  It was an old ‘lane’ which was probably used in olden times to take the cattle, sheep etc to market but it has long since become boggy and overgrown.  I spoke to the farmer who owns the land and he explained that the lane hasn’t been used for many years despite the fact that it is still shown on the OS map.  The old farmer had a job to stand, leave alone walk, and he had an amazingly broad Dorset accent.  Now I am Dorset born and bred and people say I have a broad Dorset accent, but even I had a job to understand what he was saying as he tried to direct me to another footpath!!  Perhaps it was because he was elderly!

I had more footpath trouble as I came across a badly placed hole!  You’ll need to picture the scene here!!!  I was walking across what was a nice flat and even field and as I walked, I was looking intently at the map trying to work out the route…….when I suddenly disappeared down a fox hole!  Well, to be more precise, one third of me disappeared down a fox hole and the other two thirds fell forward face first into the mud!  It was like something out of a Laurel and Hardy movie – you know the sort of thing, they are walking along together when one disappears down a man hole and the other one can’t work out where he has gone!  What would have seemed even more strange had anyone been watching was to see The Dorset Rambler laughing out loud for the next hour because it was so funny.  I just couldn’t get the Laurel and Hardy picture out of my mind!!

A badly placed hole – hmm, should I sue the farmer under health and Safety laws 😉

What was a real privilege on this walk was to watch a ewe give birth to two beautiful lambs.  The farmer and young vet were just delivering them when I crossed the field so I stopped to watch and chat to them (the farmer and vet that is, not the lambs 😉 )…..and of course to take a picture or three :)!  Apparently ewes can have anything from one to four lambs depending on the breed.  It’s interesting how it works – hill sheep only have one because they need to be bigger to cope with the rougher conditions. 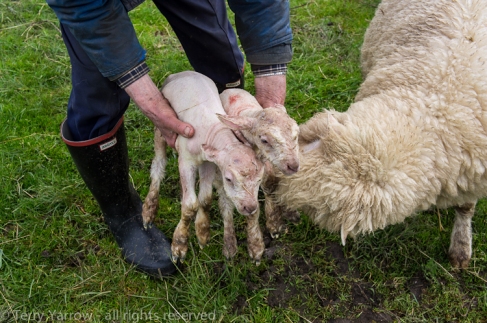 Off to the nursery, aka the barn!

This is another walk that took in a lovely village church and this one is known as the ‘Cathedral of the Vale’, such is its size.  It was in a beautiful village with the great name of Whitchurch Canonicorum – don’t you just love the Dorset names!!  The church is constructed out of the local warm coloured stone and for a village church is impressive inside and out.

The Cathedral of the Vale

One of the interesting things about this church is the tomb below.  It has three oval openings at the bottom and it is said that people used to put their hands or legs in those alcoves in order to be healed.  This is one of only two shrines in England that have survived intact after the Reformation!

The village itself is certainly pretty and as you can see from the picture below, is quintessentially English!

I have to say that despite all the rain we have had recently, the meadows are already beginning to burst into life with bluebells, dandelions and other wild flowers starting to bloom, as well as butterflies and even a slow worm.  This was a delightful part of the walk as the meadows ran alongside the river that seemed to chatter to itself, or to me, on its way down stream to the sea.

The meadows burst into Spring life

Ultimately the route took me to the sea.  All along the coast of Dorset there are reminders of the days when smuggling was rife.  Sometimes ships wrecked by storms would be plundered and at other times, the ships would be deliberately lured onto the rocks so that the cargo could be stolen and stored until later.  The contraband would often be hidden amongst the rocks and caves and then would be sneaked inland under cover of darkness.  A favourite place to stow the contraband was St Gabriel’s Church and nearby there is a sunken lane still known as the Smuggler’s Path.  It is not clear whether this was a route used by the smugglers or whether in fact it was a path created by the Excise Men to help them patrol the area.  Either way, it makes a very pleasant place to walk today!

And one of the places that the contraband would certainly have been landed is St Gabriel’s Mouth which is just a short distance from the church.  Strangely, in all my years of walking in Dorset, I had never been to St Gabriel’s Mouth until this walk.  It is always great to see new places and to see well known landmarks from a different angle so I rather enjoyed this trip.  To see Golden Cap, the highest point on the south coast of England, from below was something new and special.

In fact I decided to continue my walk along the seashore rather than climb back up over the headland as I usually do……..but it was a slightly risky decision as the tide was coming in and there were several miles to walk along the shingle.  So much so, that I ended up having to climb up above the beach and try to walk on the soft and clingy clay around the point in order to reach the safety of the beach the other side.  It was a difficult ‘walk’ and in hindsight, although the climb up over the headland at Golden Cap would have been steep, it would most certainly have been less tiring!

The cliffs along this stretch of the coast are made up of Liassic Clay which is very unstable.  As you stand below them they look very imposing and almost threatening but somehow this, and the difficulty in walking actually makes it more enjoyable and challenging.

The imposing, and crumbly, cliffs below Golden Cap

One strange thing I did see here is the rock below – I thought it looked like some sort of sea monster that had been petrified ;)!

The end of the walk was at probably the best place to finish any walk, on a Dorset beach.  As the light fades, Golden Cap stands defiant as the sea pays homage around it!  What a beautiful end to the day! 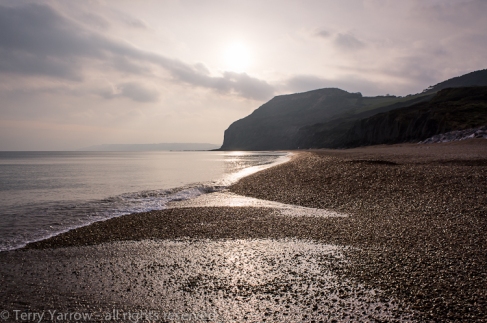 Golden Cap from the beach

Thanks for visiting and for reading the ramblings of The Dorset Rambler!