This is a walk that took me through the wonderfully picturesque valleys of inland west Dorset, along river meadows and over the highest heights along the coast.  Some of the most peaceful, pleasant, picturesque parts of Dorset.  And on route a deserted hamlet and a destroyed coast path. 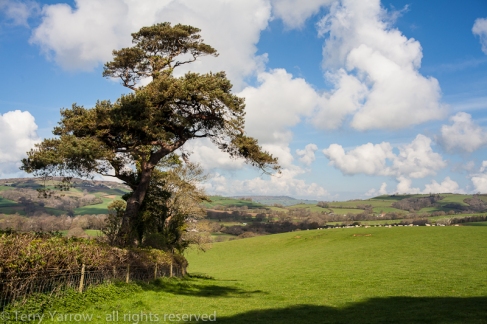 The first part took in the beautiful rolling countryside that typifies Dorset with vibrant spring greens as the fields and foliage spring back to life.  As you walk these parts, you really can understand why novelists and poets like Thomas Hardy waxed lyrical – although in reality much of Hardy’s writings were about life rather than landscape.  The farming community may have shrunk considerably since Hardy’s time with a labour force a fraction of what it was but nevertheless with the lambs, calves, and the busy-ness of the farms and woodlands, you can’t help but think about a Hardy novel. 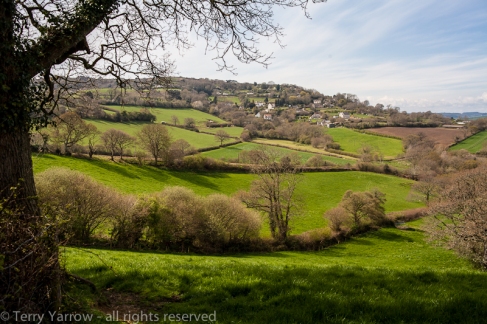 Now when I was younger, I used to have visions of becoming a farmer, although I have to say my idea was a kind of ‘rose coloured spectacles’ farming whereby I would spend my days leaning on a gate much as the one in the picture below (I can’t resist a lovely wooden gate) smoking a pipe in the ever present sunshine whilst watching the grass grow and the sheep producing their offspring.  I would also dream of becoming a shepherd, but again it was a rosy spectacles view where I would sit on a sunny hillside watching the sheep whilst I composed poetry and strummed a tune or two on my guitar.  In my farming there would be no rising at 4 am to milk the cows or muck out the pigs ;)!  Well one can dream!! 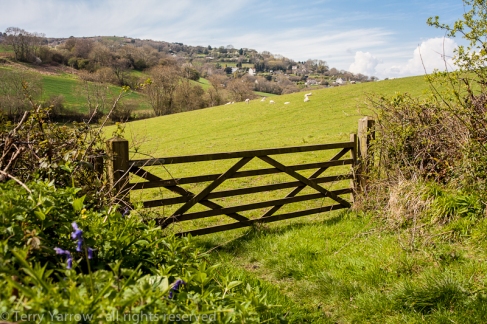 Now I have an affinity with wood!  I am convinced that one of my ancestors must have been a character from The Woodlanders.  I can never resist a wooden gate, a stile or a signpost and every walk I go on, will result in a number of pictures of these things!  Well they do seem to typify the Dorset countryside somehow.  Sadly these days wooden gates are often replaced by metal ones which definitely do not have the same effect!  I have to say that I can never resist an old barn either and frequently as I walk I come across these tumble down, broken up, rusting buildings which have long since passed their sell by date!  Oh I am so glad they don’t pull them down though!  If barns could speak, they would have many a colourful tale to tell about a lifestyle that once was.  Far from being a blot on the landscape I think they really add to it. 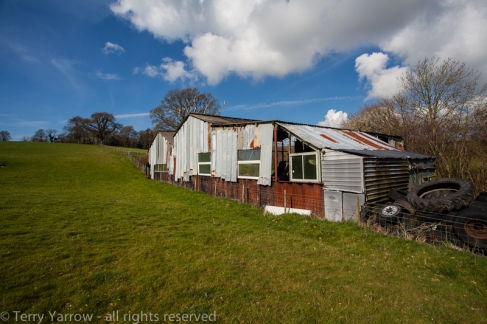 A blot on the landscape? Or part of a rich heritage?

The other thing I regularly come across is…….mud!  Lots of it, good old Dorset mud and all because of a heavy downpour the previous day.  It is great, but it does make walking hard work as you slip slide all over the path!  Here’s an interesting fact I once read – apparently on a muddy field a cow can run faster than a horse!  Now I never knew that!  It seems that because they are cloven hoofed, their hooves spread whereas a horse’s don’t and this helps them move faster.  Well you always learn something new from The Dorset Rambler’s blog ;)!

On this walk yet again I came across the inevitable missing footpath!  There always seems to be one!  It was absolutely nowhere to be seen although I knew where I needed to get to so I was able simply to hop a few fences and take a different route to reach it and get back onto my correct path.  Now I don’t normally trespass but if a farmer chooses to not observe the ‘public footpath code’, then I see nothing wrong with crossing somewhere near where I think the public footpath should be.   Incidentally, here’s another interesting fact – those notices that you often see that say ‘Trespassers will be Prosecuted’ are factually incorrect.  You prosecute someone for breaking the law but in fact trespass is not illegal unless you create criminal damage which you could then be sued for.

Having got back on track, the next part of the walk took me alongside a river.  Now I like rivers!  Apart from the rather pleasing babbling sound that running water makes, rivers are also a great aid to route finding.  On this walk, my footpath followed the route of a river for several miles which rather took away the headache of trying to work out where I was at any given moment as so long as the river was beside me, I knew I was on the right track!  And of course river valleys are also very picturesque!  This one took me right down to the coast at Charmouth.

Sadly this is where the route goes slightly wrong!  The route should take me from the sea up the coast path beside the cliffs to reach the top of Cain’s Folly but unfortunately because of coastal erosion the coast path at this point closed many years ago and so the route takes you inland and up the roadway.  In one of my earlier blog entries I commented on how the government has recently announced the ‘opening’ of the coast path all the way from Lulworth to Weymouth, a path that has for the most part been open for as long as I can remember.  I do think it is a shame that their efforts could not be put into opening a part of the coast path which has in fact definitely been closed for years and really needs to be reopened again! 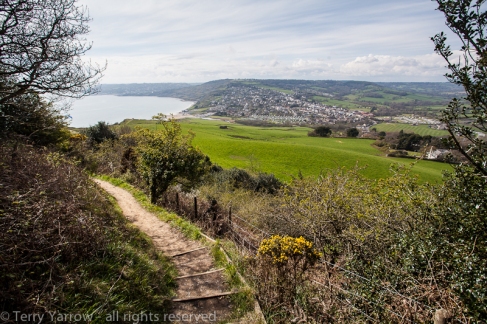 The coast path above Charmouth – no way down!

Coastal erosion is a serious problem and every year it wipes out more of our coastline and footpaths.  It’s interesting though how, even here, ‘every cloud has a silver lining’.  In the picture below, you can see how a previous massive collapse of the cliffs at Cain’s Folly has been re-colonised by nature and has become effectively a nature reserve since few feet human ever disturb that part.  This is something that has been repeated all along the Dorset coast!  When I walked through this part, I saw a beautiful country fox.  Now I don’t know if it is just me but I think the town foxes that you normally see are quite thin and mangy whereas country foxes, and this one in particular, are beautifully rounded and healthy looking with wonderful coats and bushy tails.  I guess this is because of the plentiful supply of food that the country provides and which dustbins do not.  In the same field a short distance away were a cluster of deer and they were happy to just stand there watching me as I passed by. 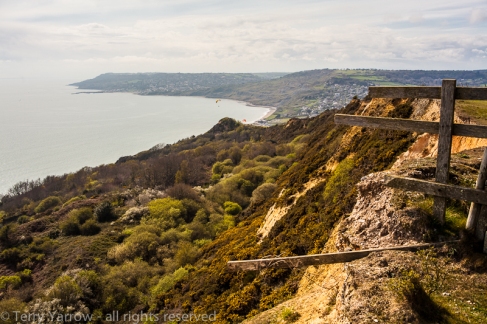 Every cloud has a silver lining

I always think that one of the problems with the coast path is that it goes up and it goes down…..rather a lot……and often I think it would be good to have a hang glider in my rucksack so that I could simply glide from one ridge top to the next ;)!  And this part of the coast certainly does go up and down, in fact its ‘up’ reaches the highest point on the south coast of England at Golden Cap.  But before that, there is an interesting detour into an extremely old deserted hamlet called Stanton St Gabriel with its ruined church and its last remaining cottages.  On the information board there is an artists impression of what this hamlet might once have looked like although in reality it goes back much further than this, as far as Saxon times.  I think it is always rewarding to take in these sorts of hamlets and to try to picture in your imagination what life might have been like in those days.  At Stanton St Gabriel, it would have been a tough existence but the position would have more than compensated for that. 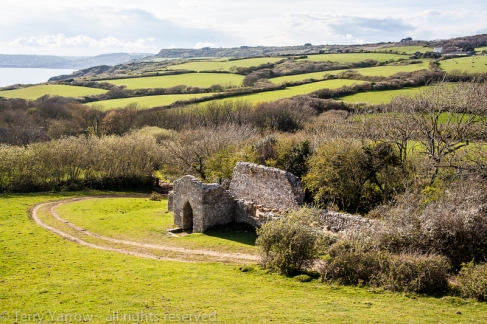 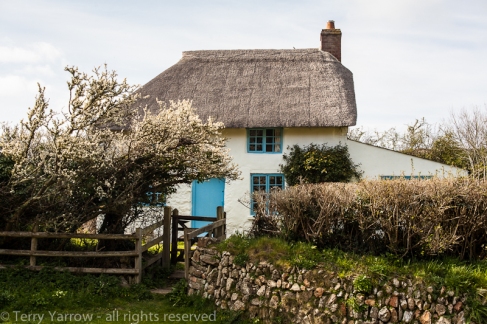 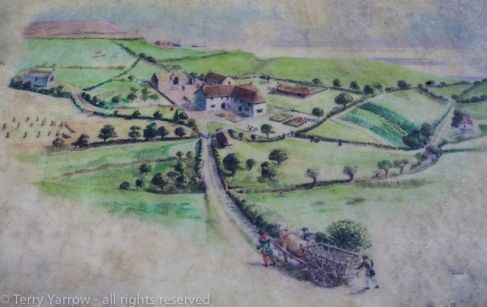 After that it was s steep climb to the top of Golden Cap with the amazing views in all directions from the top.  The picture below simply does not do this justice but hopefully you can grasp something of this place.  You just need to imagine the feeling of the wind in your hair, the sound of the sea and the smell of the wild flowers! 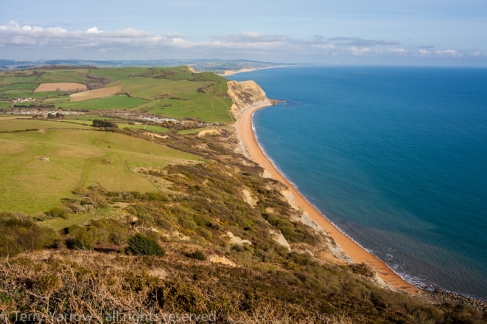 The highest heights at Golden Cap

The next stopping point on this walk was the beach at Seatown and there can be no better end to a days walking than sitting listening to the waves washing across the shingle whilst watching the fishermen drown their worms.  As you sit there with the fading sun dipping towards the horizon, you can see why Thomas Hardy and those other Dorset authors were so inspired by this wonderful county! 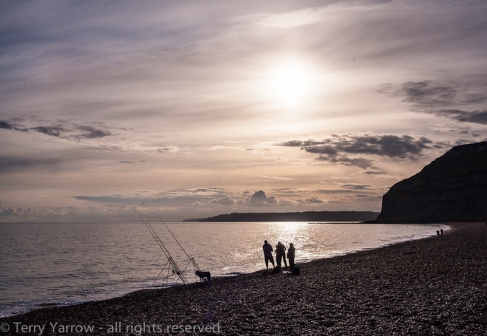 Oh yes, and about that sore head – no I didn’t go to the pub at the end of the walk!!!  It had been a very sunny day but I hadn’t realised how hot the sun was and I’d walked without a hat.  Now I have hair of a somewhat silvery tone, but clearly not enough of it, hence the sore head!!!

Thanks for stopping by and reading the ramblings of The Dorset Rambler :)!